A Play on Proportion at Thom Browne 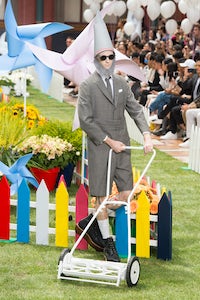 A Play on Proportion at Thom Browne

PARIS, France — There was a card on our seats on Saturday printed with the words “Please see the world through my eyes…Please…” Maybe it was an invitation to don the pair of yellow-lensed sunglasses that were also on the seat. Or, perhaps, it was a heartfelt plea — reinforced by that second “please” — to give Thom Browne a chance. Like he knew how some people feel about what he does. He even said it himself after his show: “Nonsense and ridiculous."

There was a curious moment of clarity on his part. A talk with Thom can occasionally leave you with the frustrating sense that he genuinely has no idea of the subtexts that give his work its resonance. If the setting for his latest show seemed like a psychedelic playground, soundtracked by 60s psych bands like The Electric Prunes and the Seeds, the notion hadn’t particularly impressed itself on him.

His garden was tended by benign gnomes, sharing waves and flowers with the audience. “Come and buy my toys,” sang David Bowie. “I sit and watch the children play,” Marianne Faithfull continued. Why did these references to childhood innocence feel vaguely sinister?

Because Browne’s shows move at such a stately pace that they feel alien. And they usually look just as outré. So it was with the opening passage of Browne’s latest, with massively supersized tailoring balanced on correspondent shoes with striped platforms. You could have taken in boarders in the chinos, so wide were they. It was preppy clothing on steroids: the stripes, the checks, the candy colours and the quirky little icons – lobsters, whales, anchors - writ large and beaded. The lobster motif reappeared on a leaf green mink coat with bracelet sleeves.

I couldn’t conceive of the customer, until I remembered that Browne worked on a recent project with players from the National Basketball Association in the US. Those man mountains could actually take such hyper-proportioned clothes to the street.

Schiaparelli-surreal eventually surrendered to more rational, humanly scaled proportions, which was, he insisted, all part of Browne’s master plan. He claimed he’d envisaged the collection as a play on proportion, a reminder of where it all started for him.

But seeing all the Brobdingnagian clothes that had just passed by reduced to sizes for you and me radically shifted the viewpoint. Everything looked bright and fresh, wearable, seasonally relevant. That said, the colour palette and the prissiness of a head-to-toe look did suggest we might be looking at the wardrobe of a man named Bunny. You prayed for acid to open his doors of perception - or at least, self-awareness.

But then, while those uncharitable reflections were clogging your mind, Browne’s models emerged hand in hand, arm in arm, NBA player and average joe, in a rainbow nation display of togetherness. Sharon Jones and the Dap Kings sang “This Land is Your Land” and I refuse to believe that Browne wasn’t making a comment on the shaky state of affairs in his homeland. And it was even Pride in his hometown this weekend.

Can’t we all just get along and love one another? That was a surprising and wonderful message to receive from American fashion’s wizard of weird.