A Postmodern Play at Kenzo

The Kenzo collection had panache, and rhythm, but the message got diluted in repetition. 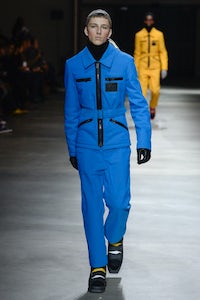 A Postmodern Play at Kenzo

The Kenzo collection had panache, and rhythm, but the message got diluted in repetition.

PARIS, France — Kenzo's Carol Lim and Humberto Leon decided for a mix-gender show this season — menswear came first and womenswear right after, with a different styling but identical music. And, of course, identical inspiration. Anyway, the feeling was slightly scholastic but a tad disconnected: 1+1. The discussion on how to solve the problem of the joined show remains widely open. As a format, it might actually work, but at the moment it has not been perfected. It needs fluidity in order to offer the impression of tranche de vie — men and women together, as if it were real life.

Speaking of which, the Kenzo show was a total tranche de vie, in the fashion sense of the word: the backstage was the stage, so that the process was the product. A very postmodern play of scales and points of view, which framed a collection based, oddly, on the outdoorsy theme of artic snowboarding, mixed with an idea of urban style, as mandatory for Kenzo. It meant outerwear and duvets aplenty, and an almost farcical stress on layering, which functioned best on men. The collection had panache, and rhythm, but the message got diluted in repetition. Short and punchy always hits the point.