A Psychedelic Fairy Tale at Schiaparelli

Bertrand Guyon's take on the Schiaparelli heritage has been growing in theatricality, but the collection lacked purpose, coming across as just a feisty, jolly affair. 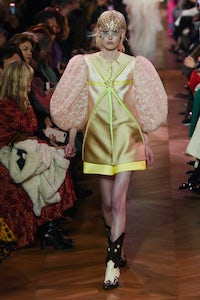 A Psychedelic Fairy Tale at Schiaparelli

Bertrand Guyon's take on the Schiaparelli heritage has been growing in theatricality, but the collection lacked purpose, coming across as just a feisty, jolly affair.

PARIS, France — "I am not a minimalist," said Schiaparelli's artistic director Bertrand Guyon after the show held Monday morning in the grand hall of the Opera de Paris. He served the sentence with a grin, looking at model Erin O'Connor's humongous tulle dress in shades of pink — a bit Roberto Capucci, a bit psychedelic fairy tale.

There was even wilder stuff in the show: rainbow gradients of sequins, brightly coloured feathers, cages, frills and so on. Guyon's take on the Schiaparelli heritage has been growing in theatricality throughout his tenure, hitting a high with this show. It was also the show where his attempt at modernising Schiaparelli — for whatever that means — was most evident.

Let's not forget, this is couture: The upper echelons of the fashion spectrum; the meeting ground of the biggest of the big spenders, which once had seriously old money, and now also have seriously new money. Hence the apparent rejuvenation. Not since the days of John Galliano at Dior had anything as unlikely as cowboy boots appeared on an haute couture catwalk, as they did here. Battered, very down to earth boots, nothing really couture. But Guyon is no Galliano, not to sound unfair. John Galliano used to throw unexpected elements into the mix for narrative reasons that were integral to the design of the collection.

At Schiaparelli, the cowboy boots were just a very good, catchy styling trick (courtesy of the ever pop-savvy Katie Grand). It was all about the catchy styling, in a way. The grand and stuffy dresses, as well as the slightly fifties/futuristic numbers were presented as disco party stuff - the glasses, the attitude, even the unwashed-looking hair pointed in that direction, like girls who stole grandma's gown to hit the club and walk the catwalk. What the collection lacked, overall, was a sense of direction, a vision of what a brand like this could be today. It lacked purpose, coming across as just a feisty, jolly affair. Fine, but a name like Schiaparelli deserves more.