After a seven-year hiatus, right-hand man Nathan Jenden returned to D​V​F with plenty of lightness​, b​ut the collection's predictability was disappointing. 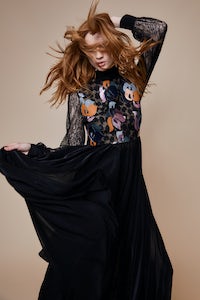 After a seven-year hiatus, right-hand man Nathan Jenden returned to D​V​F with plenty of lightness​, b​ut the collection's predictability was disappointing.

NEW YORK, United States — Sister Sledge’s disco classic He’s the Greatest Dancer was playing in Diane Von Furstenberg’s studio on Sunday morning. On one rack hung a ruched dress in leopard print georgette that looked like the sort of thing she and her friends would have worn to go dancing in the 1970s. There were cube-patterned jacquards that were equally way back when. Wrap dresses, of course, shirt dresses too.

It was all overwhelmingly, deliberately familiar, and maybe that was just how DVF wanted it, as a reminder that she’s been making these clothes to empower Everywoman for decades. “I have been a feminist for 40 years,” she declared, “and it’s more relevant than ever.”

But the predictability was disappointing after DVF’s 18-month flirtation with Scottish designer Jonathan Saunders brought a different kind of electricity to the brand. In his place, she’s re-hired Nathan Jenden, who was her right-hand man for ten years, leaving the company in 2011 to follow his own star around the globe. He said his time out had given him a new perspective on the business. “Effortlessness is key.” There was definitely plenty of lightness, like the dresses in a wool mesh that was ludicrously fine. Jenden had four weeks to design the new collection. Obviously, he already spoke the language pretty well, but kudos to his reassessment of the classic wrap. He also brought in DVF’s granddaughter Talitha to model the collection. Last time he worked with her, she was nine years old!

With Jenden returning, and with TVF wearing his designs, the family was back in the driver’s seat. It was hard not to wonder what might have been. On the other hand, DVF dropped one pearl of pure pragmatism that might explain the whole scenario. “Nathan took my business from $2M to $200M in ten years.” A new decade starts here.