No longer couture’s best-kept secret, Bouchra Jarrar is still flying too far under the radar. 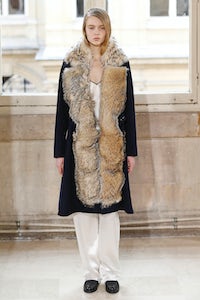 No longer couture’s best-kept secret, Bouchra Jarrar is still flying too far under the radar.

PARIS, France — Bouchra Jarrar compared her show to creating a world, with everything counting in equal amounts to make the mood. The soundtrack, for instance, Jarrar herself reading Marcel Proust over a sound tapestry by Frederic Sanchez that throbbed with the bass line from Bowie’s Subterraneans and hints of Prince. “Just as important as the collection,” the designer insisted. It certainly offered striking amplification.

Maybe there was something of Prince in a little gold waistcoat over a lace jabot, or the gold-buttoned, gold-braided drummer boy jacket (like Manet’s famous Fifer). Perhaps the Purple One even contributed a little to the ambisextrous nature of the collection. But Jarrar has always walked a tantalising razor’s edge between severity and lushness. You could read that as masculine and feminine if you so desired. This was her most glamorous expression of the duality to date. The tailoring was as acute as ever, but the textures were amped all the way up, with the dull glimmer of gold jacquard wrapped in shaggiest badger, coyote and curly lamb and a redingote shaped from a mass of feathers.

There was a mutter of paganism in the couture shows, with Schiaparelli’s harvest maidens and Valentino’s high priestesses. Jarrar’s take was intriguing, matching the shaggy wantonness to the precision of Napoleonic peacoats, jackets and gold-piped navy trousers. Duality again. It was more disciplined but just as convincing in an oversized coat in silver-shot houndstooth paired with an elegant column of creamy silk velvet. Now that was Proustian, truly the stuff of memories.