Underneath the theatrics and techno-wonders is a virtuoso of draping and cutting. 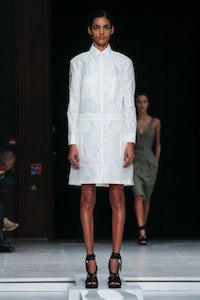 Underneath the theatrics and techno-wonders is a virtuoso of draping and cutting.

PARIS, France — Hussein Chalayan is a wonderful designer just as much as he is a conceptual and amusing entertainer. Over the years he has staged some mind-blowing fashion performances. But it would be a mistake to focus on these alone, overlooking the subtleness of his way with draping and cutting. Indeed, underneath the theatrics and techno-wonders is a true purist: an inventor who prefers to subtract rather than to add — a virtuoso of fluidity and complex simplicity. Today's show was a subtly commanding reminder of both aspects of this uniquely inventive creative.

Entitled "Pasatiempo" and suffused with a misty Cuban sultriness, the collection had a lazy charm about it. Coiling, roomy shapes revealed sections of the body without exposing them openly, thus creating a new grammar of erogenous zones. Sensuality has never been so apparent and so suffused in Chalayan's work, which made the show an interesting step forward. There were nods to workwear, too, and to reconfigured military uniforms, which gave way to some rather unconvincing experiments with prints. Overall, it was a very wearable and eminently sellable effort. As for the theatrics, the papery trenchcoats that melted under a cold shower, turning outerwear into asymmetric slip-dresses, made for an amusing moment and a charming reflection on the transformative nature of fashion. 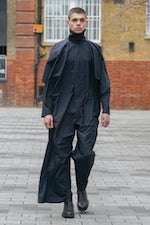 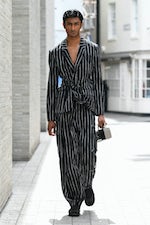 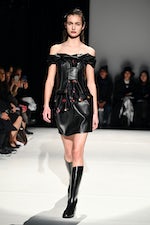 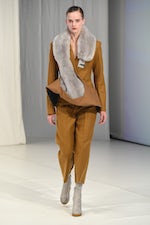