At Marni, A Work in Progress

Francesco Risso’s debut could be taken as a deliberate statement of dissociation from his adored predecessor, but it was obtuse to a fault. 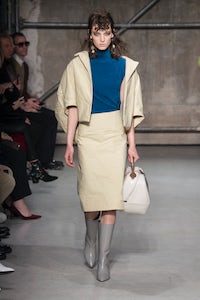 At Marni, A Work in Progress

Francesco Risso’s debut could be taken as a deliberate statement of dissociation from his adored predecessor, but it was obtuse to a fault.

MILAN, Italy — Given the massive challenge of taking up the reins of a designer as unique and adored as Consuelo Castiglioni, Francesco Risso was always going to draw down a forensic level of scrutiny with his womenswear debut at Marni.

The staging seemed to acknowledge that. It hedged its bets. Marni’s showspace on Viale Umbria was reconfigured as a shadowy building site, with looming scaffolding and bubble-wrapped plywood benches for seating. A neon sign flashing WORK IN PROGRESS would scarcely have looked out of place. And it would certainly have been an appropriate cue for the collection Rossi presented.

It was heavy on concept, which was to be expected after Risso’s seven years working with Miuccia Prada. She is a genius at using abstract ideas to add substance to collections when they most need it. Risso’s shtick was, however, obtuse to a fault. He called his collection Be1ngs, with an emphasis on the singular in the plural. Got that? No, me neither. “An individual being in the act of creating its own reality”? Still no clearer.

But what was easier to wrap one’s head around was the influence of the women in Risso’s life. He was talking personal, I was thinking professional. Castiglioni, liberated from stereotypes, Prada, free of conventional notions of beauty and ugliness. Risso’s collection was provocative in the way it dispensed with prettiness and proportion.

There was an element of perverse discomfort in high collars and ill-fitting bustiers. Or maybe it was a deliberate naiveté. Risso talked about a special wool that had been scratched till it pilled. Ghastly! Or a silk that mimicked the plastic bubblewrap on our benches. “One of my obsessions is waxed cotton,” he said. “Padded and layered, so the pieces are three-dimensional, sculptural but still very light.”

There was something fiercely utilitarian about that stuff.  Some of it was tied at the waist with string. The shaggy, matted coats could have been rescued from a recycling depot. And those hats! Oy! They looked like sou-westers clumped with sheepskin.

And yet, and yet… you could step back from the oddness (match the hats to the clunky nailhead-heeled boots) and take it all as a deliberate statement of dissociation. On the soundtrack, Brit avant-gardist Robert Wyatt crooned At Last I am Free. That song was originally written and recorded by Chic, which gave it a certain untouchability in the grand scheme of artists covering other artists. But Wyatt audaciously overlooked any reservations to make his own gorgeous version. Is that what we take away for Risso’s debut at Marni? Minus the gorgeousness, this time.