Today's show was nothing groundbreaking, but felt refreshingly straightforward and right for the moment. 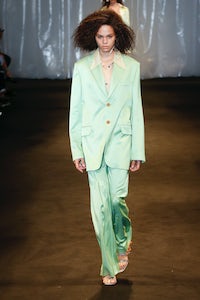 Today's show was nothing groundbreaking, but felt refreshingly straightforward and right for the moment.

PARIS, France — Over the last few years, Acne Studios could be complicated, for no particular reason other than the will to build a striking image. Today's show, on the contrary, was refreshingly straightforward. When pressed backstage, creative director Jonny Johansson conceded: "In the evolution of Acne, this collection probably brings us closer to the jeans. I was inspired by outsiders. I looked in particular at the surfers I hang out with."

Thank goodness, there were no literal surfer references in the line up. Instead, the collection had a persistent Seventies vibe: shiny fabrics that looked deliberately cheap — Johansson is a prankster at heart — but were in fact a specially starched jersey, and a colour palette of muted naturals and fastidious pastels. The lines, on the other hand, were lean and simple, with an emphasis on separates rather than striking looks: little bombers, bejewelled pants, oversized blazers, ribbed knits.

It was nothing overtly or groundbreakingly new, but it felt right for the moment, because it did not scream fashion. A palate cleanser, in fact, to decide where Acne should go next. Simple is always better.