The designer is honing his signature and it’s beginning to pay off. 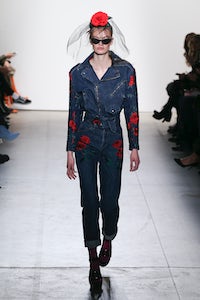 The designer is honing his signature and it’s beginning to pay off.

NEW YORK, United States — Adam Selman was a runner up in the CFDA/Vogue Fashion Fund competition last autumn, earning him a cash prize of $150,000 and a mentorship with Calvin Klein chief executive Steve Shiffman. For a designer who sees denim as one of the core tenets of his still-fledgling label, Shiffman couldn’t have been a better match.

Selman — whose previous claim to fame was dressing pop stars for the street and the stage — is learning to focus on what he does best: sheer floor-length shirt dresses unbuttoned all the the way to the hip, relaxed silk suiting and club-kid prints (like the sexy ladies sketched between florals by Spanish illustrator Ricardo Fumanal).

His aesthetic draws from workwear and rockabilly, 1950s-meets-the-1970s “American Graffiti” style, but without the rigidity. Consider the red roses, printed onto silk skirts and blouses and embroidered onto lapels and sheer trousers, along with plenty of denim. He also commissioned Brooklyn florist Saipua to design fragrant rose-studded mourning veils (inspired by Bruce Davidson’s Harlem photographs) for the models as well as mountainous bouquets for the runway set.

The stonewashed pieces in particular, from a western shirt to a pair of high-waisted denim with a perfectly squared-off top block, were fetching. Sealed with a bit of branding — “Adam Selman” in cursive etched on a silver button and stamped on a leather back-pocket label — it seems Selman has learned a thing or two about making a mark.