The designer is using his budding label to celebrate what he loves most about American sportswear: a sense of leisure. 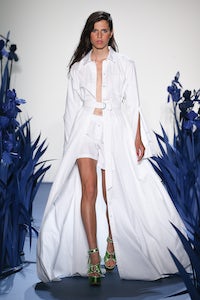 The designer is using his budding label to celebrate what he loves most about American sportswear: a sense of leisure.

NEW YORK, United States — It’s been a difficult year in the US, but Adam Selman wants everyone to know that “‘American’ is not a bad word.” Instead, the kind-hearted designer is using his budding label to celebrate some of the things he loves about American sportswear, including jeans — or “the national costume,” as Georgia O’Keefe so astutely put it —the picnic check and Halston minimalism.

Those might sound like disparate ideas, but when woven into Selman’s collection they add up to one thing: a celebration of leisure. "People come to me for a fun, special moment,” he says. For spring, that meant hand-painting irises onto sturdy, tailored-to-the-nines denim, hanging a lime-satin column gown off of a string of pearls, and letting a floor-length shirt dress splay open to unveil a pair of crisp, men’s-inspired boxer shorts. That latter look is turning into a signature. And in a country that celebrates individualism, being known for something is indeed a good thing.