The collection was aggressive, like a gang of radical feminists raiding a Savile Row tailor. 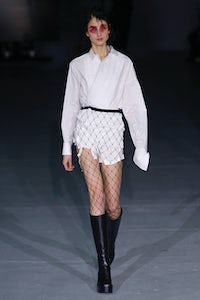 The collection was aggressive, like a gang of radical feminists raiding a Savile Row tailor.

39 View Collection
Fashion Week
Share
Comment
By Daniel Björk February 23, 2016 09:50
Share
Comment
By Daniel Björk February 23, 2016 09:50
LONDON, United Kingdom — Why do designers change cities? It makes you suspicious. Belgian husband and wife duo A.F. Vandevorst have been stalwarts of the Paris fashion scene since 1998. But all of a sudden they turn up at London Fashion Week. Maybe the French capital isn't responding to their charms anymore? In Paris, the Belgian brand was one of many, but here, their energy and sophistication felt fresh and relevant, like something London fashion had been missing.

On Monday, they staged a show that was both disturbing and full of wonder. While deconstructed men's tailoring captured that androgynous cool the Belgians do so well, terrifying masks made of belts (and yet resembling corsets) wrapped some of the models' heads and uniformed cameramen filmed the models, dividing their bodies onto several TV screens at the end of the catwalk.

What was going on? It seemed quite aggressive, like a gang of radical feminists raiding a Savile Row tailor and furiously cutting everything up and piecing it back together with a new, gothic twist. Backstage, the explanation wasn't much simpler: "A crazy woman going through her husband's wardrobe, mixing and matching, mixing things up."

There were sharp leather jackets with exaggerated collars here; vermillion red perfectos, great houndstooth knits and slouchy trousers; long velvet gowns (very old school goth) and a striped section seemingly made from men's pyjamas, paired with deconstructed denim. The designers said they had wanted to show in London for a long time and that they felt a new energy. It showed.

An Vandevorst and Filip Arickx often imagine their protagonists on faraway travels. This time, they felt they had instead "travelled in the closet." You almost felt like telling them to stay there.