The designer was untinged by a dark eroticism that made his work so striking in early days, but the pure emotional economy of the collection served him well. 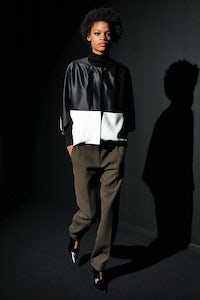 The designer was untinged by a dark eroticism that made his work so striking in early days, but the pure emotional economy of the collection served him well.

NEW YORK, United States — It was nothing Narciso Rodriguez ever imagined for himself – happily married, the father of twins – and his change in circumstance has sideswiped him with all the force of the unexpected, in the best possible way. For years, he was hesitant, insecure. Anxiety hung over him like a dark cloud. Now it’s lifted. “Everything bleak just disappears,” Rodriguez said after his presentation in his showroom on Wednesday morning. “My family makes work so much sweeter.”

That showed, in a collection where the designer’s signature sensuality was easier, happier, untinged by the dark eroticism that made his work so striking in his own darker days. He’s celebrating the 20th anniversary of his business, but that didn’t mean bells and whistles. The babies have made Rodriguez reprioritize. “I don’t want to waste time,” he said. Life has been edited to make more time for family. So has work. There were 17 looks offered to an audience of 20. The set was a striking exercise in economy of means: three pools of light accentuating shadows cast on a silvery wall, quietly dramatic. The music was Robert Owens, "I’ll Be Your Friend." Again, pure, emotional economy. You simply can’t go wrong with that.

Rodriguez talked about wanting to offer “singular things”: one great striped skirt, one piece of embroidery, one perfect wrap coat etc, etc. That kind of restraint has always served him well. But what, in fact, made the biggest impression here was the rich colour of a tomato red coat, a fuchsia pencil skirt, a deep sea green dress, as simple as a t-shirt but artfully defining the body. And, saving the best for last, an asymmetric, scarf-hemmed dress in pink crepe. Happy!