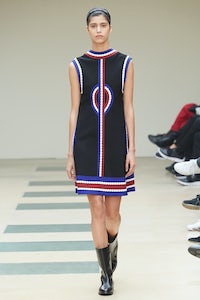 PARIS, France — Paris Fashion Week finished March 9th, but Azzedine Alaïa doesn’t care. Like menswear recluse Carol Christian Poell, the Tunisian-born couturier is one of the few designers whose schedule is all his own and for whom the constraints of the Chambre Syndicale mean little. Through his illustrious career, Alaïa has weathered many a storm and emerged ever stronger as a powerhouse of precisely engineered garments and sculptural accessories that hold their own timeless elegance against fashion’s relentless tumble of trends.

Indeed, it's with a certain conviction and a dash of defiance that Alaïa held his Autumn/Winter 2016-17 fashion show on the first ‪Sunday‬ in April, where, at the ‪2pm‬ viewing, French minister of culture Fleur Pellerin sat front row not far from supermodel Natalia Vodianova and a smattering of international press. The formality of the proceedings set this season’s presentation apart, giving it a heightened sense of ceremony in comparison to the intimate salon shows of previous years (guests even received the house’s recently launched fragrance as a parting gift). But the collection merited the extra attention; its deft melange of classical and urban conceits saw the true breadth of Mr. Alaïa’s vision realised as a wardrobe proposition for day and night that should immediately silence anyone holding the jaded opinion that his clothes are restricted to the body-conscious lines of his knitted cocktail dresses.

Instead, a flared play on proportions marked the collection as much as its unabashed sense of diversity; the show opened with a handful of a-line knit tunics dotted with tribal polka dots shot through with burgundy, blue and gold lurex and worn with flat leather boots, yet quickly gathered momentum as the designer rolled out a gamut of outerwear. Later, cocooning Watteau-back coats were cut in oiled black leather or scrolled with glossy baroque thread embroidery and officer coats finished at a severe shoulder with a trench coat belt placed high at the back, the latter perpetuating the empire line that continued with eyelet belts cinching gowns at the waist or just beneath the bust. Those knit gowns lightly sculpted the body in crunchy graphic lines or perforated, scalloped ruffles, which came traced with spidery lines of silver intarsia and even fell in alternating panels of chenille and sheer embroidered lace for a dramatic flared effect.

Exotic skins and tailoring have always marked Alaïa’s work and, today, genuine and glossy faux alligator skin appeared as a blazer and caban coat, respectively, its pattern later replicated on a cutaway tailcoat in a raised metallic textile embroidered with ‘scales.’ In black, that same tailcoat and a story of severe wool tailoring stood out for its simplicity amongst the textural excess — a mannish black suit underpinned by a cutout suede top was simply a minimalist triumph. Elsewhere, the oversized embellished sequin sweaters, après-ski leggings and ornate jacquard pullovers helped bring a fresh, youthful appeal to the 76-year-old designer’s work, yet their impact paled in comparison to the old-world glamour of his closing look: a ruched, long-sleeved gown that pooled around model Mica Arganaraz in a cascade of glinting black velvet laced with rose gold eyelets and destined for red carpet glory. 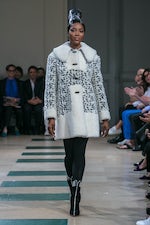