There was a lot happening at today’s show, but what kept it all together was a sense of lightness and joy. Modernity, on the other hand, was elusive. 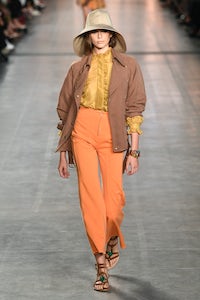 There was a lot happening at today’s show, but what kept it all together was a sense of lightness and joy. Modernity, on the other hand, was elusive.

MILAN, Italy — Daywear has been on Alberta Ferretti’s mind lately. As a pragmatic female designer, she knows how to make things that are both special and easy to wear. No wonder dresses are her forte. Crafting a younger image has been a Ferretti preoccupation in recent season, often translating into not-so-convincing overlaps with Philosophy, Aeffe‘s younger offering.

This season saw progress in the right direction: the collection felt fresh and young, but it also had its own identity — banana shaped trousers notwithstanding. "I wanted something light and joyous," said Ferretti a few hours before the show. Light meant colourful and vaguely hippie.

The intarsia suede blousons, embroidered caftans and psychedelic slip dresses looked like something that music festival attendees would have worn in the early ’70s. Woodstock, which actually happened in August 1969 — exactly fifty years ago — immediately came to mind, but Ferretti strongly denied the links. "I am interested in the moment," she said. The moment, then, requires cropped flares. It requires joupe-coulottes aplenty, too, tie-dye denim and some ’80s volumes tied at the waist.

There was a lot going on, taking the collection in many different directions, but what kept it all together was the sense of lightness and happiness in both attitude and colours. In that sense, Ferretti accomplished her mission. Modernity, however, evaded her.