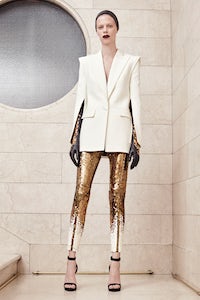 PARIS, France — The scientific application of 3D printing is pretty familiar. The fashion application? Oy! To see Donatella Versace’s couture collection, with its 3D-printed metal trim on the panniers of a 22nd century warrior dress, or its 3D-printed coiled snake belts in gleaming gold wrapping the waist of a sheer silk gown, was to experience Next Level. But that was the spirit of the thing. DV has famously said she is not interested in dressing the red carpet any longer. No wonder. The sense of occasion that permeated her new couture transcended the banalities of that particular cliché.

Its starting point was a big help. The house of Versace has always made books — now highly collectible — of its publicity campaigns. For Autumn/Winter’s couture, Donatella cast her mind back to the intense, dark medieval scenario photographer Steven Meisel conjured up for Autumn/Winter 1998’s ready-to-wear collection. From that, she somehow extracted the notion of “baroque details with a rock’n’roll twist.”

True, there was a specially rocktastic pantsuit in a rose gold brocade lurex, but the strongest looks in the collection suggested bigger, Daenerys Targaryen-style weirdness, in keeping with the Meisel shoot. Allow me this: a snaky bodysuit in bronze sequins; a chiffon dress embroidered with a marble effect; a lattice of crystals, trapping tiny leave of silver. Then there were the gowns, the flowing, slashed pieces — perforated leather, silver-traced tulle — that evoked alien queens itching for coronation.

Donatella was apparently thinking of chimera, medieval hybrids of feathers, hair, scales, skin. It’s not exactly the first place you go for a couture reference, but it made for a collection that had a very convincing — and cliché-proof — cohesion.