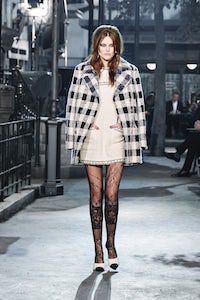 ROME, Italy — Karl Lagerfeld’s relationship with Rome has been a long and fruitful one, via his half-century-long collaboration with Fendi. Coco Chanel also loved Rome. She dressed some of the greatest Continental actresses — Jeanne Moreau, Romy Schneider, Anouk Aimee — for their performances for Italian masters Fellini, Visconti and Antonioni. We already know how Lagerfeld feels about those women, those men and their movies. So, given those synchronicities, the question was only this: what took him so long to finally bring his Métiers d’Art show — the one which each year settles in a different city with a Coco connection, to celebrate the artists and artisans of Chanel’s ateliers — down to earth on Roman soil?

Oh well, never mind. Just be grateful it happened. The whole situation was an extraordinary moment, made even more so by the events of November 13. What Lagerfeld originally envisioned as a salute to the timeless romantic idea of Paris, a celluloid dream that he first encountered as a young boy in his favourite French film Les Enfants du Paradis, unwittingly took on a timely edge. Countering terrorism’s psychotic nihilism, the new Chanel presentation recreated a vibrant little neighbourhood — a flower stall, another with fruit and veg, a vintner, a patisserie, lively restaurants, just like the ones that came under attack — but it was a poignant idyll, a vision, said Lagerfeld, of a Paris “before it was bleached by Mr Malraux.” (In the late 1950s, France’s first Minister of Cultural Affairs launched an initiative to clean the dirt of ages off Paris’ landmarks.)

But the designer was also keen to bring Rome into the picture. He rebuilt Paris on Teatro 5, the soundstage in the legendary Cinecitta studios that Fellini referred to as his “ideal place, a place to be filled, a world to be created.” (And this Paris was so exquisitely detailed that, like Rome, it was surely not built in a day). Lagerfeld’s models emerged from a Métro stop into a typical Parisian place, but there was a huge map of Rome to greet them. And the traditional French brasserie on the square was called Chez l’Ami Italien. When the clothes themselves got dressy and architectural, there were impressive echoes of Roman alta moda’s glory days, especially in a reversed cape which folded like bird’s wings in the kind of dramatic silhouette that characterised Roberto Capucci’s work.

The masterstroke of this production was its monochrome set, black and white, but with the silvery sheen of old film stock. Lagerfeld explained that sets for movies filmed in black and white, from the silent onwards, were actually built in black and white. What was remarkable here was that the tonal gradations one remembers from those old films were flawlessly duplicated. He insisted that the set was a practical necessity because the clothes he’d designed would have been lost against a coloured backdrop. Maybe that was because so many of them were elaborations on the black and white theme, the way, for instance, the cellophane shimmer on a boxy checked tweed coat evoked that silvery celluloid sheen.

On the other hand, the monochrome mood of the clothes did more than mirror the black and white set. It also loaned a sharp, disciplined focus that streamlined the collection. Big coats over slim shift dresses over lace stockings with mules or flats, trompe l’oeil sweater details, lots of black leather, smoky eyes and a sex kitten Bardot ‘do’ gave the models the mien of beat girls in smoky St Germain cellars as the Fifties turned into the Sixties…or maybe it was their Roman sisters hurtling down the Via Veneto on the back of a Vespa in search of la dolce vita. Lagerfeld has been skewing Chanel younger, and there was undoubtedly some of that here, but there was also a welcome edginess, less sugar, more spice.

And he may have signposted his truest feelings in the film he screened before the show. Called Once and Forever, it stars Kristen Stewart and Geraldine Chaplin as actresses playing different generations of Chanel (something the pair have already done more than once for Lagerfeld). Stewart is the antsy young prima donna in training, Chaplin is the seasoned old pro, and, in their subtly delineated rivalry, it is Chaplin who ultimately comes out on top. Once is Forever, Lagerfeld might have been saying.

Because, Chanel is as timeless as Paris. And they will both endure.

Disclosure: Tim Blanks travelled to Rome as a guest of Chanel. 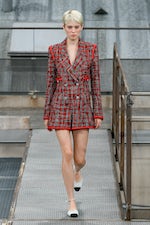 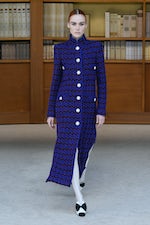