Altuzarra Plays to His Strengths

The designer felt no compulsion to adjust anything to account for a demanding new audience in Paris, conjuring up a strong, sensual, all-conquering female alter ego that was a testament to his focus. 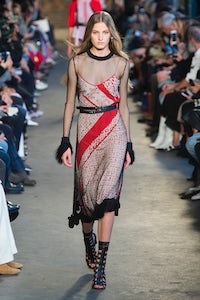 Altuzarra Plays to His Strengths

The designer felt no compulsion to adjust anything to account for a demanding new audience in Paris, conjuring up a strong, sensual, all-conquering female alter ego that was a testament to his focus.

PARIS, France — It was a measure of Joseph Altuzarra’s unshakeable self-confidence that his homecoming – back to Paris after nearly a decade in New York – looked so much like a Joseph Altuzarra collection! He felt no compulsion to adjust anything about what he does to account for a demanding new audience in the most demanding fashion environment in the world. No additional bells, bugles or whistles, just a fiercely focused play to his strengths. “Not a blank slate, a new chapter,” the designer said after his show.

Testament to his focus was the way in which Altuzarra so thoroughly sublimated his inspirations. One was Hayao Miyazaki’s anime classic "Princess Mononoke". Its fable of nature under threat from human predations kind of gelled with his other turn-on, "Wilder Mann", Charles Freger’s photographic record of the pagan rituals that still survive around Europe. Wild, like Michel Gaubert’s soundtrack. But it was intense, disciplined sophistication that determined the character of the clothes. It's that which has always made Altuzarra seem so much older than his years as a designer. It meant he was able to co-opt the waywardness of his influences. The fringing, the crochet and hand knits, the fuzzy trims of Mongolian lamb on jackets embroidered with tribal motifs, even the pompoms outlining hems added rich, unpredictable textures, but not in such a way that they detracted from the fierce urban chic of the whole.

“The wildness is inside me,” Altuzarra insisted. “My avatar is raw.” He thought one way in which his return to Paris might have impacted his creative process was that it had reconnected him with “the insecure and nerdy part of me”. That was the part which, as he detailed in his interview in BoF earlier this week, made him conjure up a strong, sensual, all-conquering female alter ego, the ultimate revenge of the nerd. She was out in full force on Saturday night, swathed in fishnet, second-skin pencil skirt slashed to here, ever so slightly dishabille, ribbon ties untied, buttons unbuttoned. But calculatedly so. That intense discipline again. And yet when Joseph’s creation walked the finale in evening dresses limned with gilded embroidery, liquid with sequins, it was easy to imagine that she will escape her creator, find a whole new life for herself. In Paris.