Joseph Altuzarra's fantasy of the cliché bourgeois woman dogged his collection, and if the designer decides to stay in Paris, he may need an exorcist. 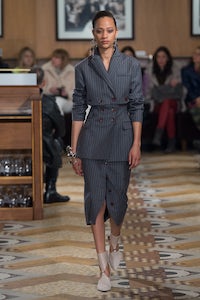 Joseph Altuzarra's fantasy of the cliché bourgeois woman dogged his collection, and if the designer decides to stay in Paris, he may need an exorcist.

PARIS, France — Moving his show to Paris has jazzed Joseph Altuzarra’s business. Sales are up. The French love him. And, in a way, he’s home, where he was born and raised in the 7th arrondissement. So it made sense that his latest collection, the first he’d designed with Paris in mind, would plumb the depths of memory. Like his mother getting ready for work at a bank, where she had to dress with a masculine edge to be taken seriously. Cue tailored pinstripes and checks, a broader shoulder, a sharper waist, a herringbone coat with a big knit collar (bookmark that look). But Altuzarra was also thinking about women he was used to seeing on the street. A little boho floatiness in soft georgette. I’d love to know the rue in which such easygoing sensuality was the norm. Anyway, here it yielded smocked dresses fitted across the hip, flaring into gypsy skirts, spangled with paillettes. An easy evening look, if that’s what you’re after, and the highlight of the collection.

Now, another memory, the inspiration for Altuzarra’s career in fashion: Tom Ford, prince of darkness. Joseph said the grommeting details on a brown leather dress, a tunic top were inspired by s&m masks. The rings dangling off a camel cabled two-piece were septum rings. And all the leather and suede was intended to infuse a dark undercurrent into his bourgeois vision. Any of those notions could have sprung from Ford’s perfervid imagination.

It’s been quite the season in Paris for this fantasy of the bourgeois woman, rich, uptight and ready to go. A consummate cliché, in other words. In truth, it dogged Altuzarra’s collection, just as it ultimately weighed down Ford. A dark tie-dyed velvet dress paired with silver boots bridged the decades between the two designers with a curious kind of cod decadence. Stir in the slicked-back hair, the classically smoky eye and the saxy “Bladerunner” moment and the echoes were resoundingly resonant. Even more so that Altuzarra chose to stage his show in La Coupole, the Montparnasse brasserie that was once HQ for the swinging Seventies scene in Paris. So many fabulous ghosts. If Altuzarra decides to stay in Paris, he may need an exorcist.