The collection was less a reflection of the designer's chic urban signature and more louche summer languor, but that felt just as true. 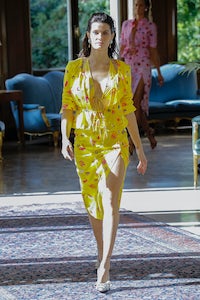 The collection was less a reflection of the designer's chic urban signature and more louche summer languor, but that felt just as true.

And Michel Gaubert excerpted Ennio Morricone’s soundtrack to underscore the impression. He also used Georges Delerue’s music for “Contempt," which starred Brigitte Bardot in grown-up tigress-not-kitten mode. That further compounded the heat of the show. So you’re getting the picture, right?

This was the presentation where Altuzarra’s relocation to Paris fell into place. The feel of the collection was less his chic urban signature, more louche summer languor, but that felt just as true to him. Maybe more so, given his post-show declaration about celebrating the vulnerability of a woman lost in love.

The first look defined what followed: Isabeli Fontana, ever Ava, in a sunny yellow cotton pencil skirt and jacket, loosely laced over a matching bra. Sleeves pushed up, skirt slit high on the thigh (or buttoned up the front), midriff bared, everything suggestive of the sensual distraction of someone in the first flush of passion.

And that was the template of the collection, the laced, louche look rendered in cotton-candy-coloured gingham, or suede, or patchworked tan leather, or the crochet that dissolved into fringing. It was mostly one note, but it played a seductive tune. The finale was drizzled in aqueous paillettes, as though the Altuzarra woman was rising from the Med, a celluloid goddess.

The bared midriffs were, said Altuzarra, his acknowledgment of the third chakra, the most vulnerable spot on the human body and thus, presumably, the part that is most sensitive when love muscles in. He has often put that kind of arcane spin on his collections. Here, there were also belts and necklaces of charms, shells, rings, things you might keep as souvenirs of summer love. They added an artisanal charm to the story.