Alexandre Mattiussi returned to his roots with an assured affirmation of progressive Parisian classicism. 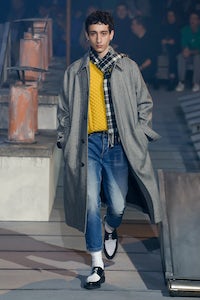 Alexandre Mattiussi returned to his roots with an assured affirmation of progressive Parisian classicism.

PARIS, France — "I wanted the show to feel like a perfect postcard, almost like a cliché that everyone could recognise as quintessentially Parisian," said Alexandre Mattiussi of his latest outing for Ami, staged on a reproduction of a classic Parisian rooftop. "This season marks our seventh anniversary: I thought it was time to reassess the core values of the brand. Paris is the essence of what we are."

Ami was founded on the idea of offering smart and stylish customers a wardrobe of subtly updated Paris-flavoured classics to play with. Everything is considered, from the camel coat to the perfecto to tailored pieces. Such an approach, of course, translates into a play of themes and variations that is barely perceptible from one season to the next. A wardrobe, after all, is a living organism that grows organically on the long run.

Admittedly, Ami is very nice to look at and to wear, but it is so calm and normal — in a good way — it almost disappears on the catwalk. Hence the theatrical set up. There have been seasons in the recent past when Mattiussi dared to play, rather unconvincingly, the "fashion" card. Today's show, instead, was an assured affirmation of progressive classicism. It was good. There is honesty in Ami's modus operandi, and also in the pricing: a quality customers perceive, and the reason of the label's growing success.