An Appetite for Reduction at Loewe

Jonathan Anderson makes oddity effortless. But his maturity as a designer means that the eccentricity is merely one arrow in his quiver of very convincing fashion possibilities. 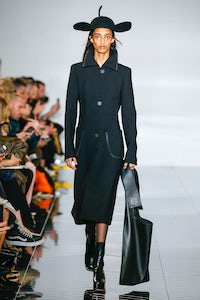 An Appetite for Reduction at Loewe

Jonathan Anderson makes oddity effortless. But his maturity as a designer means that the eccentricity is merely one arrow in his quiver of very convincing fashion possibilities.

PARIS, France — Jonathan Anderson said the first and last looks bookended the collection he showed for Loewe on Friday morning. The first, nothing more than a fiercely tailored black coat. The last, a similar dark coat, erupting in white lace scarf points. The hardest silhouette tempered by the softest. Because that’s what the collection was all about. Silhouette! Reduction!

Which was the challenge Anderson set himself. It wasn’t a back-to-basics reduction. It was more a celebration of core principles. How little was too little? He’d seen a tiny Richard Tuttle line drawing exhibited all alone in a massive room and been impressed by the dramatic economy. Still, when he walked into the Loewe show space and truly absorbed the minimalism of the polished black parquet floor and the stark white walls, a few of which were lined with painted miniatures dating back as far as the 16th century, Anderson was nervous. The window-dressing of a fashion show is a crutch for a designer.

Those miniatures made an odd little subtext. “The selfies of their times,” Anderson called them. “They were never meant to be glamourized. They were about really showing exactly who you were.” He was making a clear connection with now. “There’s something in the air about us looking at each other.” And that was the root of his appetite for reduction. Bring everything down to the essence of character, the power of the first impression.

It was a very character-full collection. At its core was a group of exquisitely strong coats. Nothing better, Anderson insisted, for “making you make sure the garment can cope on its own.” But posed against such robustness, the exquisite fragility of purest white lace, linen, cotton. In the same vein, a black leather a-line which ended in a foam of white shearling. There was something severely Catholic about the lush starkness: the black, the white, the drizzle of pearls, and those flyaway skullcaps, like Minnie Mouse in a wimple. Something quite Spanish, actually. Almost as though Anderson had exhausted his exploration of Balearic Bohemia and headed back to Loewe’s luxuriously shadowy heartland.

If his collection was as gorgeously polished as the herringbone parquet, Anderson also winkled some of his trademark idiosyncrasies into the mix. Fran Summers’s poet blouse was paired with a tinsel skirt. There were pompoms and feather boas threaded with silk to unhinge the austerity. The footwear included strangely appealing squashed moccasins. Anderson makes oddity effortless. But his maturity as a designer means that the eccentricity is merely one arrow in his quiver of very convincing fashion possibilities.