Now that Virgil Abloh has an outlet to clarify how broad his creative output truly is, his work in fashion can stand and evolve on its own. 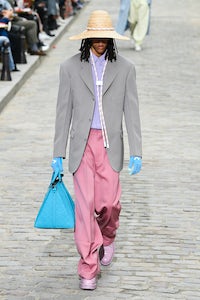 Now that Virgil Abloh has an outlet to clarify how broad his creative output truly is, his work in fashion can stand and evolve on its own.

PARIS, France — The Louis Vuitton invitation was a kit to build a kite. “I’ve recently been into the emotional quality of any object that makes you feel like a kid,” Virgil Abloh explained, with a whiff of the overly analytical approach that weights everything he does. He mentioned an old French movie called “The Red Balloon,” in which a little kid chases said balloon around Paris. I died. That was the first movie I ever saw. My grandmother took me. I was maybe five. My emotional buttons were pressed.

That is something Abloh does effortlessly, for better or worse. There is surely no more polarising designer in fashion. Any Instagram post relating to him, however innocent, activates an army of trolls. I imagine they’ll find creative new ways to stitch him up after the collection he showed for Louis Vuitton on Thursday.

A little too much Craig Green in the oversize silhouettes, the lacing and monkish layering? Maybe even a reference or two to Kim Jones, his predecessor at Vuitton? It’s all there. He gives a rat’s ass. He is fashion’s single most unabashed challenge to the notion that the original idea counts for anything in pop creativity. As John Lennon once sagely noted, leaving Jefferson Airplane wailing in his wake: “It’s not who does it first, it’s who does it second that counts.”

At least no one can accuse Abloh of co-opting Fendi’s gardening theme from Monday’s show in Milan, unless there is actually a super-mole in the Fendi atelier. Though it was a funny coincidence that both Fendi and Vuitton found solace in nature, in flowers, and the delicacy of dreamy floral organzas.

“How do we interact with nature?” Abloh wondered. He claimed flowers were his new take on diversity, a step up from last season’s “We Are The World” embrace (which got bogged down in Michael Jackson). He reconceptualised the harness — a signature piece — in white daisies, worn on the catwalk by musician Dev Hynes. You could scarcely wish for a more graphic description of flower power.

But Abloh also emphasised delicacy in the floral embroideries that crept upwards from waistbands and hems. The effect wasn’t particularly masculine. He said that had been a hurdle for him. It was hard to see why given that he also talked about how enraptured he’d always been by the fairytale fantasy of fashion. His models walked with glittered faces, literally gilded youth, and the clothes they wore had little to do with quotidian reality. T-shirt and baggy pants? Yeah, but the pants were crocodile.

Abloh said his current career retrospective in Chicago is only 30 per cent fashion. That loaned an interesting perspective to this show. Now he has an outlet to clarify how broad his creative output truly is, his work in fashion can stand and evolve on its own. He agreed it’s been liberating for him. Hence the volumes, the challenges to tailoring, the colour palette (soap colours, he called them). He said he wants to turn men onto suits, with Stefano Pilati as his spirit guide: nipped jackets, voluminous pants.

Abloh’s curse is, the minute he is open about something like that, the haters screech copyist. He’d maybe insist that acknowledged inspiration softens such an accusation. I’ll leave that notion to the on-liners who’ll crap on me from a great height for this review, but Abloh definitely possesses invaluable assets that others could do well to acquire.

First and foremost, CURIOSITY. He’s always asking questions, hungry to hoover up knowledge about anything and everything (remember, there is another 70 per cent to that exhibition in Chicago). The second thing, he has a PHOTOGRAPHIC MEMORY. Abloh looks out of his Vuitton studio at the old Samaritaine department store across the street. It’s been under renovation forever. The hoardings just came off and now he’s staring into the ground floor, and it triggered memories of photographs he’d seen of the artist Christo working there on his plan to wrap the Pont Neuf bridge at the end of the street. So, in the collection, there were jackets and accessories tied up like a Christo sculpture (a detail I liked).

What I think about that is how wonderful it would be to have the resources to realise your unlikeliest dreams. Turn a Parisian square into your own fashion playground. Get an orchestra to play your favourite Nick Drake song. Fly a kite. They’re all the kind of things you do when you’ve won the lottery. And Abloh has.