There was an overwhelming sense that Luke and Lucy Meier were not just cleaning house, but also taking a stand against fashion excess. 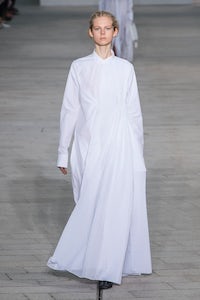 There was an overwhelming sense that Luke and Lucy Meier were not just cleaning house, but also taking a stand against fashion excess.

MILAN, Italy — If Luke and Lucy Meier wanted to stake a claim to Jil Sander’s minimalist legacy, they couldn’t have chosen a better location for their debut show. Under a towering futuristic sliver designed by Zaha Hadid, their monumental set stretched into the middle distance, as clinical as the billowing white looks that opened the presentation. “The white shirt is the icon of the house,” said Luke.

Their approach to it — extended to the floor, waterfalled with plissé — was simultaneously as stark and sensual as Nina Simone's voice on the soundtrack. As more women followed in white smocks or dark cassocks, they came to seem like penitents, especially because some were carrying minaudieres that looked like prayer books.

Between the Nina Simone song (Be My Husband: “If you want me to, I’ll cook and sew, outside you, there’s no place to go”) and the intense, slow, ritualistic nature of the presentation, I started to feel The Handmaid’s Tale creeping over me. And when the collection moved away into artisanal mohair knits and floor-sweeping macramé, it still felt like we were in a small, closed, rigorously minded community, the kind of place where handcrafts could be a singular release from the strictness of the prevailing order. The impression was helped by the fact that the boys in the show (and yes, they were boys) felt like they were attendants to the women. But extend that scenario a little further and you also encountered the town’s jezebels, one in a slick, oily tank dress, the other in a net of sky-blue.

The Meiers said they were keen to bring out the contrasts in the brand, between Jil’s minimalism and the femininity, lightness and emotion which were less acknowledged. There was also the overwhelming sense that they were performing some kind of exorcism here, not just cleaning house at Jil Sander, but also taking a stand against fashion excess. Unfortunately, I come down hard on the side of the sinners.