An Incongruity of Reality at Alexander McQueen

Sarah Burton wanted less fantasy in this collection—  in other words, the thing that puts the mack in McQueen — but the result still projected an alternate reality. 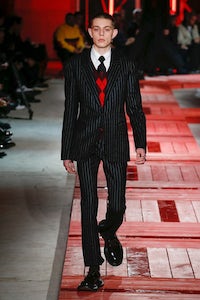 An Incongruity of Reality at Alexander McQueen

Sarah Burton wanted less fantasy in this collection—  in other words, the thing that puts the mack in McQueen — but the result still projected an alternate reality.

PARIS, France — You never know what’s behind the next door. A brief conversation with Sarah Burton about her approach to the latest menswear collection for Alexander McQueen turned into a chat about Samuel Beckett, the arch Irish avant-gardist who remains one of the 20th century’s most influential observers of the human condition. “I loved his quietness, how he’d say one thing and retract it immediately – or say nothing at all,” Burton said. “He was obsessed with the reality of how people are with each other.” That struck a chord with her. She insisted reality was where she was at with her new collection. She wanted less fantasy, less embellishment — less, in other words, of those things that put the mack in McQueen.

It was as impossible a challenge as trying to uncrown the real Queen. Yes, there were “real” men’s clothes in the McQueen collection — razor-sharp suits, enveloping knitwear, Brobdingnagian duffels and shearlings and an olive green leather parka that screamed TRY ME BUY ME – but the styling projected an alternate reality, access as easy as folding down and tying a trench coat at the waist to form a hourglass silhouette that flew away into dramatic skirts. Try this at home, kids. White linen shirttails also flew free, delicately embroidered like papal vestments. Fact is, McQueen is a dream, floating in fashion’s ether like a dark, irresistible fantasy. Its coincidence with commercial considerations probably errs on the side of random, but there is undying succour in its mere existence. Burton’s man transitioned from his world of tailoring and leather bombers into a salon of silken smoking jackets with jet beading and quilted lapels, of suits hand-painted with blowsy roses, of coats dense with swirling embroidery. The furious incongruity of the massive white tech footwear that accompanied such extravagance was a mere concession to nowness. After all, how fast can you run when you’re under the spell of the poppy?