Anarchy in the New Energy at Proenza

A lot of the elements that define Proenza Schouler had been amped up. Colour, technology, craft: they were all given a push. 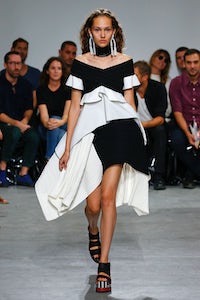 Anarchy in the New Energy at Proenza

A lot of the elements that define Proenza Schouler had been amped up. Colour, technology, craft: they were all given a push.

NEW YORK, United States — Lazaro Hernandez and Jack McCollough's hearts are in their art and craft. For their latest collection, they printed Bernini sculptures on t-shirts. Their last look featured a heart shape in a black cashmere top. They borrowed it from a painting by John Currin. Asked him first, of course. They said he was sincerely flattered. Apparently, no one had ever made such a request before.

But you can’t really imagine many people saying no to the Proenza Schouler boys. They also charmed their way into Parisian couture ateliers, where they found hand-loomed fabrics like a red and black cloth where the black was actually woven ostrich feathers, the same feathers that formed a froth of fringe on the dress that the fabric was made into.

Then the focus on handcraft took them to Japan for ultralight woven leather, cut in such a way that it looked like a samurai’s skirts. Skipping continents, striped knit sheaths had a Masai feel. A Proenza Schouler collection has often had a tribal flavour — even if sometimes that tribe was just their coterie of adoring fans in New York — but here the idea was more manifest. In fact, it felt like a lot of the elements that define Proenza Schouler had been amped up. Colour, technology, craft: they were all given a push. “We wanted to focus on bringing the energy back to our core codes,” said McCollough added. “We had seven months — so much time! —  to build this collection,” added Hernandez.

That sounds slightly effortful, but what came down the catwalk had a spontaneous bounce. Tops were fitted over skirts that flared into undulating scarf points.  Some of the most striking dresses were casually knotted across the torso. Again, the analogy was Japanese, Miyake or vintage Kawakubo.

The temptation with a Proenza Schouler collection was often to overthink it, because it looked like that’s what Hernandez and McCollough did while they were creating it. Their latest offering resisted that temptation, maybe because there was some anarchy in the new energy. Showing a mink coat for Spring edged on arch — except that the duo belted it with a cotton tee.