The designer blended her Polynesian heritage and her bottomless appetite for pop culture into one convincing catwalk whole. 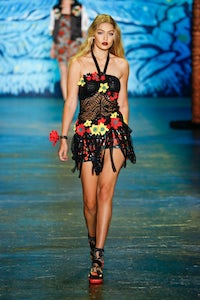 The designer blended her Polynesian heritage and her bottomless appetite for pop culture into one convincing catwalk whole.

NEW YORK, United States — Every single one of Anna Sui’s collections involves an enthralling amount of research. One brilliant gem leads to another. Then she has to reconcile all the fabulosity she has uncovered into one convincing catwalk whole. And Sui manages that season after season. But this time, it was different. This time, it was personal.

As literally fantastic as her Polynesian scenario appeared — the palm-tree lined catwalk, the dark oceanic glitter of her tropical prints, the grass skirts! — it was firmly rooted in bloodline. Her father’s family opened stores in Tahiti in the 1930s, and she is related to every Chinese family in French Polynesia. Robert Wan, the black pearl king, is a cousin. So Sui got the extraordinary strand of pearls she was wearing during a studio preview the other day for “a family price”. Oh, to be so connected!

Sui’s career is also a testament to the power of memory. Every Christmas, her family in Detroit would get a package of handcrafts from their relatives in Tahiti.

Her mother’s shell-encrusted dress showed up on the catwalk on Wednesday.  And Sui worked to recreate the extraordinary patterns she remembered. But she didn’t do it on her own. The semi-mythic Zandra Rhodes contributed a print with feathers, shells and hibiscus. Hush Puppies, another very new strategic alliance, created wedge-heeled shoes that would have driven Dorothy Lamour into a delirium. And this is where we move away from the immediate family connection into Anna’s bottomless appetite for every single wrinkle of pop culture. Dorothy Lamour starred in hundreds of so-called sarong movies during the tiki culture boom of the 1940s and 1950s. Her ghost hovered above the catwalk on Wednesday. But so did Barbara Stanwyck’s, star of 1941’s Ball of Fire where she played Sugarpuss O’Shea, whose name was blazed across a souvenir jacket in Sui’s show. It felt like there were dresses from Stanwyck’s closet on the runway, so accurately does Sui recreate a period, a place, a tribe.

And yet we always have to come back to make the point that Anna Sui’s collections may be soaked in the past, but they’re not retro. She blended Tahiti with Honolulu, which stirred a little trepidation about where exactly we are on the spectrum of the Hawaiian print renaissance, but the way that she added a slightly evil lurex glitter twisted the cliché. She borrowed banding from the oldest kind of surf shorts as a significant leitmotif on dresses. And she launched her new bathing suit line with a set of swimwear made for Roxy Music cover girls. The girl can’t help it. 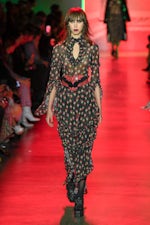 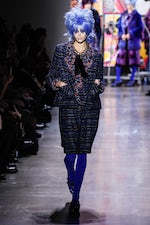 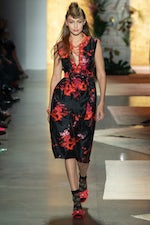 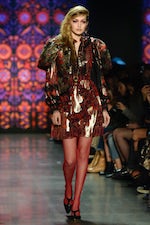