In a collection that reflected the designer's crafty, decorative code, the floaty knotted numbers stole the show. 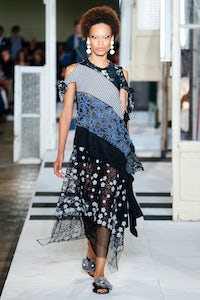 In a collection that reflected the designer's crafty, decorative code, the floaty knotted numbers stole the show.

MILAN, Italy — This season, Antonio Marras went to Africa for inspiration. It was not the codified Africa one would expect in this moment of widespread exoticism, however. Rather, we saw the western-influenced, feisty Africa depicted by Malik Sibidé, who in the late Fifties, Sixties and Seventies documented the party scene in Bamako, Mali. Think Sunday best, proudly demure silhouettes and a ton of hairspray.

"I want to celebrate music and fashion as forces that surpass borders and bring people together," Marras explained backstage. The collection was another iteration of Marras' intensely crafty, decorative code, this time rendered in rather vintage looking Fifties silhouettes. In fact, it was the floaty, airy knotted numbers that stole the show.