Though Rei Kawakubo has made a speciality of moments of high drama, there is nevertheless the nagging notion that her challenges to fashion orthodoxy have taken on a tinge of predictability. 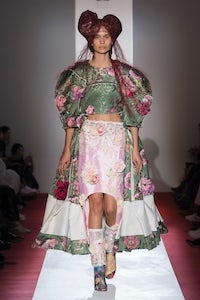 Though Rei Kawakubo has made a speciality of moments of high drama, there is nevertheless the nagging notion that her challenges to fashion orthodoxy have taken on a tinge of predictability.

PARIS, France — Saturday’s Comme des Garçons show cued the second act in Rei Kawakubo’s three-act fashion drama based on "Orlando," Virginia Woolf’s astonishingly prescient story of one individual’s gender-fluid journey from Elizabethan England to now-ish. The first act was the men’s show in June, the last will be the December premiere in Vienna of Olga Neuwirth’s opera based on Woolf’s novel. Kawakubo is designing the costumes.

The middle act, the collection she presented on Saturday, spun June’s “Orlando” in a different direction. You’d expect that. June was, after all, menswear, though it had Kawakubo’s own anarchic spin on masculine verities. In other words, it had infanta sleeves, ruffles and petticoats, and pearls all over. The models also sported immaculately marcelled hair, as they swung to a soundtrack of live jazz drumming and a recorded vocal by Carmen McRae.

Come September’s womenswear and Kawakubo launched her show with a soundtrack of classical pomp and circumstance. Woolf’s Orlando was born in the 16th century. So was Kawakubo’s, in all the aristocratic extravaganza of beflowered brocade, with turrets of hair to convey social elevation. The designer followed Orlando as he/she moved through the centuries. “Transformation and liberation through time,” according to Kawakubo’s cryptic counsel. A full-skirted 18th century silhouette, panniers, a pastoral print suggestive of Gainsborough. Then, modern times, with Orlando in jackets brashly branded COMME DES GARÇONS, contemporary logomania. The pink satin of a blazer-and-bermudas combo hinted at Real Housewives “reality” garb. A hoop skirt matched to a black runner bustier brought innocence and experience together in one starkly fetishistic union. Worn with white lace socks and black pumps!

And so to The Future, Orlando’s finale. The June show ended with strings of pearls and gemstones printed on T-shirts. Brash fakery! It’s everywhere. Here, Kawakubo strikes a different, much darker chord. The silhouettes are stark, geometric, reduced to the tetrahedron object in which one model walks the runway. The rich cultural pell-mell of earlier centuries is stilled. Everything is black. The music stops and the last woman walks in silence. THE END IS NIGH. All else is night.

Think about it. Rei Kawakubo has made a speciality of such moments of high drama. Hiking the catwalk oh so high made that even more obvious. But her show on Saturday left a niggle. Granted she now has a production to dress and the operatic ante is upped, there is nevertheless the nagging notion that her challenges to fashion orthodoxy have taken on a tinge of predictability. No one has pushed the limitations of the human torso more. Her exploded volumes, her bumps and lumps (here, there were excrescences at the knee) have undoubtedly expanded the space a human body can claim in clothes. But Saturday’s closing shot hinted at a darkling plain. What does she see now? We wait with bated breath for December’s premiere.