Shayne Oliver takes us on a pilgrimage of extreme deconstructed volume and revolutionary red PVC. 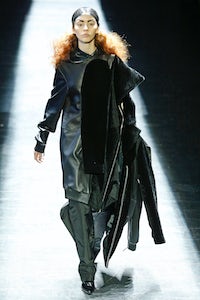 Shayne Oliver takes us on a pilgrimage of extreme deconstructed volume and revolutionary red PVC.

NEW YORK, United States — Things fall apart. The centre cannot hold. And if anyone can do the chaos justice, it’s Shayne Oliver. Though his new presentation for Hood by Air was actually his most disciplined to date — clotheswise at least — the song it sang was revolution, the French Revolution to be specific. Models walked in wigs that were reminders of Robespierre and Danton and the men who sat in judgement on doomed aristocrats. There were big white poet shirts, outerwear sized like capes, torrents of pleats and latex ruffles that could be construed as contemporary takes on the garb that those aristos would have worn to the guillotine. Red saran wrap around the throat mimicked the gash left by the guillotine’s blade. Of course, this was my fantasy, but Oliver said he did, in fact, have judges in mind, along with the founding fathers of the Republic, who were inspired by the French revolutionaries. He called his collection Pilgrimage because it was pilgrims who colonised America, and he was thinking about what it takes to be first, especially when the ideals that motivate pioneers can so easily be debased by reality’s demands. Chaos usually follows.

Extreme deconstructed volume has always been an Oliver signature, but there was a pilgrim rigour to the way it was used here, heads hooded with extra shirts, sleeves extended, torsos elongated to create a dark monkish silhouette. Oliver played sombre black against revolutionary red PVC, the same stuff Malcolm McLaren used to dress the New York Dolls as Soviet agitators when he wanted to push the American music industry’s buttons forty years ago. Agitation was Oliver’s theme as well, on the catwalk, with Russian art anarchist Slava Mogutin brandishing a huge cape-like quilted thing in red and black (when he actually wore it, it could have been a cardinal’s robe) and in the audience, with HBA models running up and down the aisles with increasing urgency, spurred on by Oliver’s muse Hirakish, whose spidery agility in stilettos was a thing of weird wonder. Other models were probably grateful they got to wear waders, which have never looked so apocalyptic. Footwear for when the flood comes.

And come it will, given the state of flux that fashion is in. Revolution is in the air and, if you accept that fashion mirrors wider concerns, then clearly a readjustment is on the way for everyone. Oliver has already embraced the idea with HBA’s engagement with the LGBTQ community. The complex, ritualistic nature of his latest performance hinted at redemption through revolution. Or maybe that was just the soundtrack, a fantastic pot pourri of sound from the DJ Total Freedom. Oliver’s collaborations are an invaluable reminder of just how critical community is to creativity. 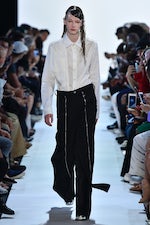 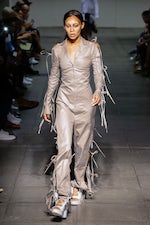