Anthony Vaccarello has proved himself accomplished at turning a relatively limited repertoire into a fully-fledged and remarkably convincing performance. 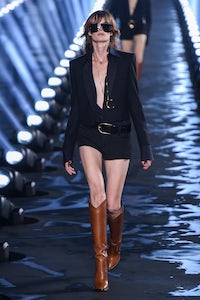 Anthony Vaccarello has proved himself accomplished at turning a relatively limited repertoire into a fully-fledged and remarkably convincing performance.

PARIS, France — What’s particularly striking about “Loulou and Yves,” Christopher Petkanas’s recent oral history of the world of Yves Saint Laurent and his inspiratrice Loulou de la Falaise, is how little of it is absorbed by the actual creative turmoil it took to create some of the greatest fashion collections of all time. His subjects were hardcore party people and muck will be raked when it comes to telling their tales because that muck has the irresistible allure that effortlessly attached itself to the lost souls who survive now in flashbulbed pap shots from long-gone nightspots.

Anthony Vaccarello would be dressing those people now if they’d lived. He made that quite clear with the signature piece of his latest collection for Saint Laurent. It was a pair of tiny hotpants, which he delivered in everything from pinstripes to black lacquered python. “An homage to myself,” he called the shorts, which were quite unlike the rest of the collection, an artful attenuation of Yves’s own tropes. “I did a collection like that three, four seasons before I came to Saint Laurent.” They were a reminder that there is no look that defines rock’n’roll glamour quite like a glittery long jacket over a tank and tiny shorts paired with knee-high heeled boots. Cut it in black, add a gold accent and I’m with the band.

So that was Tony V. Yves SL was another story. Vaccarello is absorbed by the legacy, but up until now he’s artfully backgrounded it. Here, however, it was easier to detect traces of Yves. The gypsy headscarves signposted a salute to Saint Laurent’s famous couture collection for Autumn 1976, the one inspired by Russian peasant garb. A slew of gilded, lavishly embroidered peasant dresses followed. Images of Jerry Hall, zoning out in the controversial ads for YSL’s Opium perfume, swilled through my brainpan. It all harked back to Tom Ford’s time at Saint Laurent. Vaccarello too was enthralled by this particular period in the protean Yves’s career. He insisted the show’s extraordinary lighting scheme — an acreage of spotlights turned upwards to create a cathedral of light that was quite the rival of Albert Speer’s at Nuremberg in the 1930s — was a contemporary mutation of the chandeliers that lit the presentation of the Russian collection. “Putting the lights in the floor is a chandelier for nowadays,” Vaccarello claimed. “It’s like seeing all the lights when you’re drunk.” Double-vision, you mean? “Yes.” Quite “Loulou and Yves,” in other words.

In his own mind, the essence of the collection was an homage to le smoking, the now-iconic tuxedo look with which Saint Laurent up-ended fashion verities in 1966. Vaccarello showed every possible variant, with a distinct emphasis on shine. Naomi Campbell closed the show in a jacket and pants pavé-ed with black sequins. It was the grace note for a collection that emphasised darkness and a curious heaviness that echoed through the thunderous soundtrack. “Nothing you think of when you think of summer,” Vaccarello said. Intriguing, considering that he showed his men’s collection for Spring 2020 on Malibu Beach. There were no beach boys here. But what that soundtrack drummed into my skull was how accomplished Anthony Vaccarello has proved himself at turning a relatively limited repertoire into a fully-fledged and remarkably convincing performance. Because that’s exactly what this was.