The Austrian designer built his latest collection around Secessionist Koloman Moser — a match made in heaven — but the execution was clumsy at times. 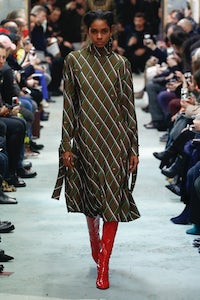 The Austrian designer built his latest collection around Secessionist Koloman Moser — a match made in heaven — but the execution was clumsy at times.

MILAN, Italy — Milan-based Austrian designer Arthur Arbesser often delves into his Viennese roots. This season, he embraced the Secessionist movement — Viennese proto-modernism at its best — building his whole collection around an homage to one of its key figures: Koloman Moser. Secessionists were total designers who envisioned ways of living through clothing, furniture and upholstery. Moser was known for his use of stripes. Arbesser is known for his love of geometry. The match between the two was made in heaven and worked to Arbesser's advantage.

Arbesser can be a bit cold as a designer, but the homecoming, which came with an exploration of softer views of femininity, translated into something warmer, more welcoming for the eye. It was stripes galore on loose dresses, skirts and coat that projected slightly nostalgic visions of elegance — something very Viennese, indeed. At times, the newfound softness verged on clumsy, especially when stripes gave way to blotchy flowers. Which brings us back to Moser and the idea of total design.

Arbesser is a wonderful designer. As objects, his pieces are a perfect balance of texture, pattern and shape. Fashion, however, must be wearable and with Arbesser there's sometimes a disconnect between the abstraction of his ideas and the physical reality of the body. This collection was a step forward in the right direction, but there is still work to do.