Following a number of exits, Carolina Herrera needs to find the right team to execute her vision in a fresh way. 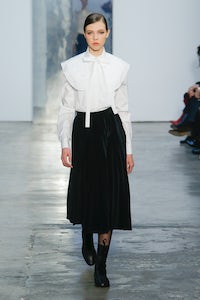 Following a number of exits, Carolina Herrera needs to find the right team to execute her vision in a fresh way.

NEW YORK, United States — For Spring/Summer 2017, Carolina Herrera showed a denim ballgown, which sounds like a red carpet nightmare straight out of 2004. But it was executed perfectly, with topstitch seaming on the bodice and cascading ruffles that gave it a light and modern feel.

The designer’s Autumn/Winter 2017 collection failed to maintain that air of lightness. The idea was to return to the designer’s roots — with a focus on the white shirt, her longtime signature — and she turned out few styles that contained the necessary newness, whether that meant a bow tied about the elbow or a tiered bib with a high-neck collar decorating the neckline.

Accents of black velvet — bows covering pockets, or ribbon tied up at the shirt collar — were pleasing. But generally, the collection was drab, both in silhouette and colour, from the muted sequin floral to the too-easy tiers of chiffon.

With more than a billion dollars in retail sales (the majority of which come from fragrance), Herrera's reach is global and her brand is personal. (Backstage before the show, she was, as always, its best ambassador, wearing a stand-up collar shirt and her bestselling Good Girl fragrance, which launched in the US at Macy’s this past holiday season.)

But over the past year, there have been several much-gossiped-about changes on her design team, from the exit of her longtime creative director to the unceremonious departure of former Oscar de la Renta designers Laura Kim and Fernando Garcia, who returned the to rival house late last year. (They make their debut there later today.)

One can’t help thinking of them when considering the direction the House of Carolina has taken, and it’s easy to posit that Kim and Garcia were what Herrera needed to move the brand forward. But that’s over and done now, and Herrera needs to find the right team to execute her vision in a fresh way. She deserves that much.