It wasn’t like a bad trip, but Stuart Vevers has already proved he knows his way around drama and it just didn’t lift this time. 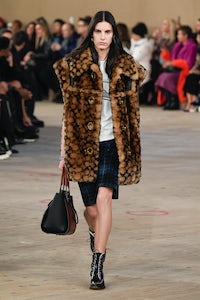 It wasn’t like a bad trip, but Stuart Vevers has already proved he knows his way around drama and it just didn’t lift this time.

NEW YORK, United States — If fashion ever goes south as a career for Stuart Vevers, another world awaits for him as an artist. He designed the two spectacular sculptures that anchored the Coach catwalk on Tuesday: massive, metallic, geometrical shapes bobbing and spinning in the spaciest way. They had nothing to do with the clothes Vevers showed which was a shame because his collection could have done with a little of their edge.

Backstage, he spoke the magic word: psychedelia. Then he mentioned his collaborator for the collection. KAFFE FASSETT! The elder statesman of handcrafts, needlework, patchwork you name it. Eighty one years old and sitting in the front row mere inches from Joan Smalls. Vevers said he was drawn to Fassett for “colour and motion and nature.” He turned the entire print element of the collection over to him. All the clotted florals, swirling acid abstractions, dense mineral strata were Fassett’s. The darkness was Vevers’. Maybe he can’t help it. He wouldn’t be the first outsider who looked at America and saw all things Gothic (after all, film noir was created in Hollywood by European directors in exile).

Thing is, Vevers has done this sort of thing before, and familiarity diminished the impact of his designs. He insisted the filmy, floaty, scarf-hemmed dresses weren’t so much about the pent-up prairie this time. The women were wearing surf shorts as well: the beach as a new frontier. But that’s scarcely new. How often have we seen designers acknowledging the fact that sunlight makes the shadows that much darker?

True, it was a dramatic, cinematic effect, amplified by the overdyeing which intensified Fassett’s patchwork. But Vevers has already proved he knows his way around drama and it just didn’t lift this time. There was a curious monotone holding everything in check. Too much of that gloomy, frilly floatiness. So it was scarcely surprising that the items that resonated most were those with the most spine: the leather jackets, the oversized shearlings.

When someone gives you psychedelia as their magic word, you’re immediately hind-legs expectant of something glittery and transcendent. Not the case here. It wasn’t like it was a bad trip, but I’ll be expecting a whole lot more next time round. I'll take two of those sculptures for my backyard though.