Despite the fact that other fashion colleges have just arrived on the London Fashion Week schedule, CSM remains a leader in its field, standing heads and shoulders above any other London institution. 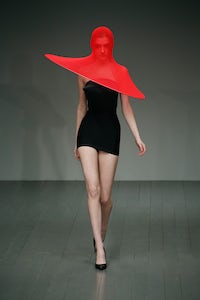 Despite the fact that other fashion colleges have just arrived on the London Fashion Week schedule, CSM remains a leader in its field, standing heads and shoulders above any other London institution.

LONDON, United Kingdom — There must be something in the water at Central Saint Martins. Despite the fact that other fashion colleges have just arrived on the London Fashion Week schedule, CSM remains a leader in its field, standing heads and shoulders above any other London institution. Why? Because its MA programme — fearlessly led by the late Louise Wilson and now by her successor, Fabio Piras — encourages its students to be radically progressive and — above all — independent. As a result, its graduates emerge with a sense of confidence that is part of the reason why so many of them brazenly — some might say recklessly — leap into launching their own label.

This year’s class didn’t disappoint. If you were to look at the show as a whole, you could come away with some recurring themes — extreme shoulders, sharp suiting, fluorescently synthetic colour — but it was less about collective mentality and more about individual ideologies.

Throughout the show, the womenswear stood out especially for its variety and vibrancy. To start, Liam Rhys Johnson opened the show with a meditation on shape, colour and movement. The colours were reminiscent of the early Microsoft logo, a signal of the period in which he spent his formative years. The clothes were like opaque digital icons or blocks — some involved literal foam blocks — yet they had a sense of dimension IRL that will transcend the images of them that will live on flat screens.

Yuhan Wang’s sorbet-shaded draped dresses, spliced and panelled on the bias, could easily evolve into a more pieces that many women will want in their wardrobe. Laura and Deanna Fanning, the Australian sister act, sent out neon video game heroines in seamlessly patched-together knits and metallic mesh-knit slips. The result was a vibrant sci-fi armour for this troubling day and age. Anne Isabella Rasmussen artfully combined modish geometry — think Courrèges mini-shifts, safari dresses, low-slung corduroy pea coats — with modern edges and retro prints. Paula Canovas del Vas’s bright felt and latex collection was embossed and debossed with flower power motifs that caused one member of the audience to exclaim that they had “never seen anything like it.”

Last but certainly not least provocative, Edwin Mohney’s bizarre vision of political dime-store couture received cheers for its fearlessness. The Buffalo-born designer made makeshift clothes from the likes of duct tape, costume shop wigs, plastic carrier bags. He even described it as “Amazon Prime meets couture; Millennial Lacroix meets politics.” There were nods to Donald Trump with the mask-stilettos and 1980s excess, as well as diapers and seemingly yonic red and pink ghosts, held up by plastic water bottles. Whatever it all meant, it won points for its boldness and entertainment value, which brings to question the purpose of the CSM show in a rapidly changing fashion landscape. Once, the show was purely a way for the industry to scout stars-in-the-making. Today, Central Saint Martins is a brand in its own right with a global audience of spectators.

Mohney’s final looks were women caged into dummies structures, a pertinent idea in the age of #MeToo that may not be what it seems. The image of pacified women is nothing new in fashion — especially when it comes to restrictive, aggressively sexualised clothes. But women as pacifiers? There’s a thought for a new generation.