At Erdem, a D-Day of Beauty

Amidst a weather-beaten boardwalk and billowing sails, Erdem Moralioglu gave his drowned damsels in distress a buttoned-down eroticism. 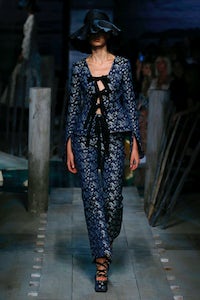 At Erdem, a D-Day of Beauty

Amidst a weather-beaten boardwalk and billowing sails, Erdem Moralioglu gave his drowned damsels in distress a buttoned-down eroticism.

LONDON, United Kingdom — Arch romantic that he is, Erdem Moralioglu's scenarios often involve damsels in distress. Monday morning’s revolved around possibly the most romantic yet: a shipwreck. In 2014, a silk dress belonging to Jean Ker, Countess of Roxburghe, governess to the children of Charles I and spy for the King, was discovered, remarkably well-preserved given that it was over 350 years old, in a wreck off the coast of Holland. In a creative quantum leap, Erdem imagined a wardrobe lost in time emerging on the beach in Deauville, Chanel’s old stamping ground. “The landing of an army of women,” he mused. Or, in other words, a regular D-Day of beauty.

Against a backdrop of weather-beaten boardwalk and billowing sails, atmospherically set in the shadowy ruins of the old Selfridge’s Hotel, Erdem mixed baroque jacquards based on techniques from the mid-17th century with the long, lean silhouettes of the early 20th, when the legendary photographer Lartigue was in Deauville snapping stylish women on the beachfront. The fabrics had distress woven into them, and embroidery bursting through, as though Jean Ker had sewn jewels into her clothes which the sea was slowly sucking out. Trailing across dresses, they even looked a little like strands of seaweed.

Erdem balanced high-necked, long-sleeved propriety with dresses whose off-the-shoulder dishabillé were overtly sensual. But the tension between restraint and release has always infused his collections with a buttoned-down eroticism. Here, the feeling of the body moving under sheer clothes was like watching it underwater, as if the women were indeed just walking out of the ocean onto the beach at Deauville, dressed in shades of pale which suited the notion of the revenant. Two lace dresses, one in red, the other yellow, looked positively brazen by comparison. But even their ragged languor was a mere appetiser for the last gown, a showstopper, literally and figuratively. Made up of bias-cut strips of raw-edged chiffon jacquard, it could have been a wedding dress for the bride of The Mummy (who was also a returnee of some renown).