At Fashion East, More Than Clothes

The three designers couldn’t have been more distinctively different, but each of them had something more to say. 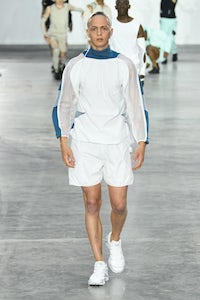 At Fashion East, More Than Clothes

The three designers couldn’t have been more distinctively different, but each of them had something more to say.

LONDON, United Kingdom — Since she launched the initiative with the Old Truman Brewery in the year 2000, Lulu Kennedy’s Fashion East has been the lab that's produced many of London’s best and brightest. Its latest iteration was a smart illustration of how and why it works so well. The three voices couldn’t have been more distinctively different, but each of them had something more to say than mere fashion. “Voice of a community” might sound like a hoary old cliché, but when you see it at work with someone like Mowalola Ogunlesi, the notion packs a punch. London-Lagos is the latest fashion axis, and Mowalola’s hyper-sexualised leathers turned her crowd out! She added her own personal wrinkle — she’s fallen in love and she’s finding the feeling of being emotionally out of control horrific. There will be blood. In fact, there was blood, trickling from piercings, dripping from bullet holes. Eros&Thanatos, Love&Death. Startling!

Joining Mowalola for a second time at the Fashion East rodeo was Dublin native Robyn Lynch. Hiked shorts and terrycloth tops in 70s shades of maroon, sky blue and mint green were her memory of holiday camps from her childhood, long before there was social media to impose its crushing self-consciousness. Here, the awkwardness was simply that of sporty, hormone-driven teens, in sandals and socks their mums made them wear. Of course, it wasn’t that straightforward. Robyn injected panels of cable-knit or nylon, toyed with proportions, so that not everything was quite what it seemed. Still, it wasn’t quite clear where she can take this.

Not so with Saul Nash, the least-known quantity of the three. What Lulu Kennedy has always done brilliantly is find the left-fielder, the name from nowhere who leaves an impression quite disproportionate to their presentation. Nash is a dancer and recent menswear graduate of the Royal College of Art. He choreographed a group of dancer friends in a mesmerising performance which showed his design ability was the match of his dance expertise. The clothes could be construed as very sophisticated workout wear, but their particular body consciousness — the zips and slits and openings that revealed the skin beneath, the sleeves and leggings that emphasised limbs — was informed by the pure sensuality of dance. Again, I haven’t a clue where he’ll take it (snapped up by a sportswear giant?), but for now, all eyes on Nash.