Baptista's second outing for Kenzo, with its striking veiled beekeeping suits, looked much more convincing than his debut. 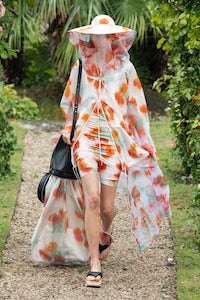 Baptista's second outing for Kenzo, with its striking veiled beekeeping suits, looked much more convincing than his debut.

PARIS, France — This one was timely. As I sat down to watch the Kenzo show on my computer, remotely from Milan, the postman rang the bell and delivered a Kenzo care package containing a newspaper-style scrapbook and a little jar of honey. I sipped a spoonful of honey, read the paper and watched the show, which was held in a garden en plein air in the trademark Parisian gloom.

Gloomy is not an adjective you’d ever associate with Kenzo, but since Felipe Oliveira Baptista took the creative reins — this one was his second show at the house — he’s brought a thin layer of melancholy, of Portuguesefado to speak in cliches, to the proceedings. A veil, let’s call it. And today, what struck me most was the veiled suits — a nod to beekeeping which was an undercurrent theme to the collection, catchingly entitled Bee a Tiger — both covering the heads and, on some cases, the entire bodies of the models. It was like witnessing a visual rendering of the self-isolation we experienced during in the hard months of quarantine.

This set the tone of the show, which swung between protective and practical pieces — outerwear, in particular, and more fragile and floaty items, all interconnected in layered, knotted looks. In the handwritten note in the opening page of the newspaper, Baptista spoke about clothes that adapt to different situations, and, most of all, about the opposing, dichotomic feelings he tried to catch and convey. These are feelings — fragility and strength, hope and despair — we are all experiencing these days, as it takes a lot of effort to stay optimistic.

All in all, Baptista's second outing for Kenzo, created under rather extreme conditions, looked much more convincing than his debut. Still, it could have been more sharply focused. But Baptista knew that already, stating: “The references, ideas and concepts of this collection are as eclectic, varied and contrasted as the states of mind that I went through since the beginning of the pandemic.” In this way, it made sense.