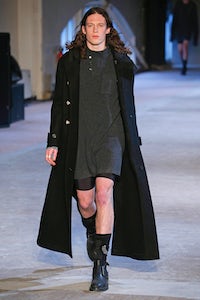 PARIS, France — First, the news: an anonymous committee — not John Galliano — still designs Maison Margiela’s menswear collection. Sound strange? Perhaps it is because the Margiela man — edgy, raw and decidedly young, and not just because of the casting — follows the eponymous founder's recipe far more orthodoxly than the Margiela woman. But let's not fuss over these details; Margiela has always operated following an alternative, at times even inscrutable, path.

Held in a derelict warehouse, today's show was one of Margiela's best in recent times: it had a certain coherence and a palpable energy, which made it look like a possible proposition— outfits that could have a meaning beyond the catwalk — not just exercises in design and styling. The rather esoteric show notes framed it all under the catchy formula "finding humanity and acknowledging the machine," proposing a pastiche of pragmatism as the methodology. Which, in fact, was just a beautifully put way to describe the quintessentially Margiela proclivity for appropriation and de-contextualisation of elements culled from the classic menswear repertoire — shapes like the blazer, the tailored suit, the coat — tweaked and morphed according to conceptual principles. The result is both familiar and off-putting, which is the true Margiela trademark.

The starting point was the classic duffel coat, which got sliced this way and that, elongated into a gilet, made grittily solemn and ultimately cool. Around this consistent backbone, a flourish of twisted tailoring worn in various states of clubbing distress and undress. There were potent whiffs of perversion wandering about: with their half-laced boots, bare legs and suits worn with a bare chest, Margiela's moodily sharp dressers looked ready to disappear into some sort of sex club. Or maybe pedal away: cycling shorts made a brief appearance, which, after Issey Miyake yesterday, might herald the unexpected comeback of one of the most ghastly styles in recent times. This, too, is perversion. 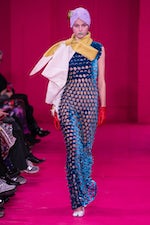 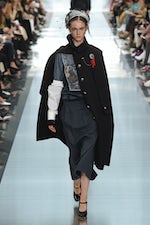 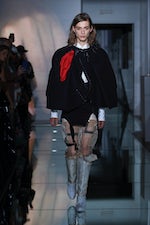 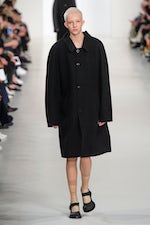