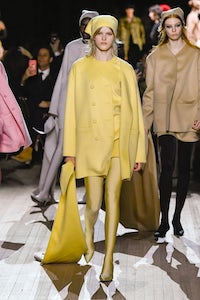 NEW YORK, United States — In the notes that accompanied his latest show “Chaos and Form”, Marc Jacobs nailed the most indelible element of the Autumn/Winter season so far: the power of storytelling through movement. Michele Rizzo’s choreography for the Marni men’s presentation and Damien Jalet’s staging of Jun Takahashi’s Undercover spectacular have provided the thrilling highpoints of the past six weeks. On Wednesday night, Jacobs made it a perfect trifecta with a show that was wrapped around the choreography of Karole Armitage, the so-called “punk ballerina” whose work Jacobs has loved since she first made her mark in the ’80s.

Hard to believe they’d never met till little more than a week ago. Even harder to believe that the performance we saw on Wednesday was put together in that time. Inside the cavernous darkness of the Park Avenue Armoury, 80+ models did their walking thing while 50+ dancers froze in formal tableaux or collapsed in chaos around them, echoing Armitage's most influential ballets. The resounding musical accompaniment was supplied by Russian composer Anton Batagov, whom Wiki tells me has been named the greatest pianist of our time. It was a night when such superlatives scarcely seemed adequate to describe what we were seeing and hearing and, in that, it harked back to some of Jacobs’s past triumphs. Appropriate, given that, in his notes, he also referenced “a fading picture of a disappearing New York.” He lived some of the most enduring myths — Studio 54, the Mudd Club — and those he wasn’t party to he diligently recreated in a career which has scaled the heights of American fashion. That’s exactly where Jacobs was headed once again on Wednesday.

Time has always been a theme for him: too much, too little, time passed, time wasted, time unlived. Jacobs has few peers in his ability to evoke the essence of other eras. With this collection his stated goals were a restraint and purity that existed outside time, but his medium was modernism, specifically as it was expressed in the designs of arch-modernists Rudi Gernreich and Stephen Sprouse.

Jacobs already drew on the latter to great effect at Louis Vuitton, but here he was inspired by a memory of a Sprouse show at Manhattan nightspot the Ritz. He dialed down the original fluoro but played up the youthquaking proportions and monochrome palette (those stockings!). And Rudi’s radical body-consciousness was a dream complement, the sculpted breasts on second-skin tops a reminder of how truly transgressive he was in the late '50s and early '60s.

Jacobs himself has often toyed with transgression. He is a past master of the power of suggestion, so much so that even his seemingly soul-baring interview in the New York Times this week served to darken the shadows in his past. That helped explain the peculiar frisson of Bella Hadid emerging in full patrician evening rig, hair Babe-Paley-blow-dried out to there, white opera gloves up to here. It was the context: in amidst the other young women in their princess coats, or Peter-Pan-collared schoolgirl shifts, or bra-tops and shorts, Bella looked like a glittering fetish object, an emblem of a particular kind of American triumphalism. (I hesitate to say trophy wife but there was something of that in there.) In fact, the whole presentation was, on many levels, evocative of a time when America was unquestionably Number One, with New York the most dazzling stone in its diadem. But that time is, as Jacobs so sagely pointed out, fading, disappearing.

And that is where the power of fetish asserts itself most potently in fashion, as a way to preserve and celebrate and polish past glories to a fine sheen. I don’t think there’s another soul in fashion who has quite the grasp of that process as Marc Jacobs (maybe Miuccia Prada, who I felt hovering over this collection in a spectral way). The true believer is helpless in the face of it.

So Marc had his totems. Bella was one, Adut Akech in diamonds and black leather was another. And so was Lexi Boling, all but last on the runway in a monumental salmon pink confection whose sculptural majesty was diffused by one single tiny bow at the bust. At show’s end, dozens and dozens of models formed a line across the Armoury, magicked out of the shadows by Stefan Beckman’s dazzlingly stark staging. Jacobs emerged from the midst of the throng, threw his arms exultantly in the air… and the darkness came crashing back in. But Marc the magician had kept it at bay for the most precious ten minutes in New York’s fashion week, when time stood still.