At Marni, Hybrids of the Past

There is something engaging and un-fashion-y in Francesco Risso's wholehearted embrace of alternate realities. 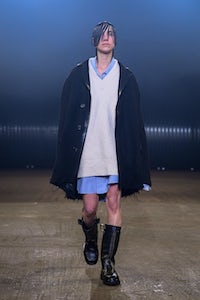 At Marni, Hybrids of the Past

There is something engaging and un-fashion-y in Francesco Risso's wholehearted embrace of alternate realities.

MILAN, Italy — In Edgar Allen Poe’s Masque of the Red Death, Prince Prospero seals his friends inside his abbey to party wildly until the plague that is ravaging the world outside the walls abates. Still, Death manages to sneak in and annihilate the revellers.

This was the scenario Francesco Risso adapted for his extraordinary presentation for Marni on Saturday. He was Prospero. He filled his catwalk with beautiful young bodies, writhing until the tension broke like a fever. It was a rave. It was a rejection. Death never made it through this Prospero’s front door. Love conquered all.

Risso’s invitation was a dose sheet of LSD, 100 tabs, tested by the designer himself and found sorely chemical-free. Still, the intention was clear. An invitation to escape. Blue pill, red pill, down the rabbit hole. We entered the show space through a series of winding tunnels to stand around a moonlit rectangle. Figures crouched motionless, or swayed hypnotically. The sun rose, the bodies began to move. And move. From so-slo-mo to furious no-slo-mo. It was a physical tour-de-force (What you are seeing here is a post-show distillation.)

Risso worked with performance artist-cum-choreographer Michele Rizzo, who created an intricately interlaced, increasingly Dionysian ritual, groups and solos, tight as a drum. You imagined every dance academy in Milan had been corralled into the show. They rehearsed for a solid week. Risso said he loved every second, seeing through the dancers’ eyes, feeling through their movements.

He’s an empath. He feels not just people, but the life of objects. Heirlooms. There were pieces here that were created from leftovers of clothes from the 1950s. A hand-painted velvet that was missing bits, completed now with pieces of satin and leather. An embroidered evening coat finished with one brown leather sleeve. “New hybrids of the past,” Risso called them. Randomness has emerged as his signature. An oversized jacket, chewed by moths, paired with motocross pants and ballet slippers? That feels about right. Boiled wool coats, pilled and nibbled by age? Leathers lacquered with a patina like moths’ wings. Yes, that’s Risso’s Marni. He talked about “the persistence of time, the beauty of the leftovers,” Prospero and his guests dancing to the end of love. Raving in huge polka-dotted and diagonal-striped play clothes. But the taut, cut torsos of Risso’s performers were also wrapped in second-skin body gloves, woven with the radiant sacred heart. He described them as “reaching out for eternal love through body language.”

Risso is scarcely naïve enough to believe that love really does conquer all. And Death will inevitably find its way into the citadel. But there is something so engaging and un-fashion-y in his wholehearted embrace of alternate realities that his voice rings with clarion conviction. What’s left when you’ve danced to the end of love? Faith. Blind, beautiful faith.