If there was a level of chaos in the layers of Rose’s collection, you could imagine it reflecting her own frustration. 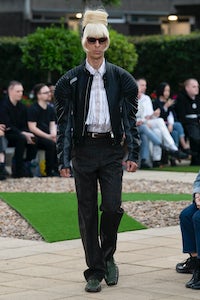 If there was a level of chaos in the layers of Rose’s collection, you could imagine it reflecting her own frustration.

LONDON, United Kingdom — It was the Weekend of the Wig in London, designer after designer topping their looks with utterly artificial topiary. Martine Rose’s were a minor masterpiece of incongruity, beehives and bobs and backcombs plopped down any which way on her models’ heads. Exaggerated, twisted, surreal… they were the perfect complement to a collection of clothing Rose called “a critique of contemporary British politics”.

She said she was referencing the subcultures of the early 1980s, anything from football hooligans to new romantics, but all of them distorted into different shapes and sizes: the shell suit with wide brocade sleeves, the denim jacket with the power shoulder, the fringed cowboy shirt with baggy soulboy pants, the mishmash of the market stall. A t-shirt was printed “Promising Britain,” a jolly clown surrounded by the 12 stars of the EU flag. A bomber jacket bore the message “Some Place Special”. But Brexit-dogged Britain is no such place. Its promise has dimmed. The clowns are in charge, and the joke isn’t funny anymore.

If there was a level of chaos in the layers of Rose’s collection — and in a soundtrack that skittered furiously across the songs of an era — you could imagine it reflecting her own frustration. These are difficult times, and she offered difficult looks to go with them, as discombobulated as those wigs.