The collection was nicely executed and highly wearable but failed to really carry the 'Killing Eve'-inspired narrative referenced by designer Ian Griffiths. 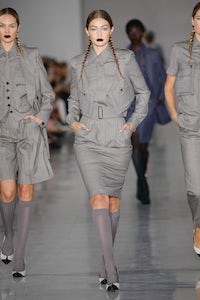 The collection was nicely executed and highly wearable but failed to really carry the 'Killing Eve'-inspired narrative referenced by designer Ian Griffiths.

MILAN, Italy — Ah, storytelling: is there a way to escape it? Almost everyone in fashion right now feels obliged to bring some form of narrative to a show. The problem is: these so-called stories read like press releases. Speaking of press, Ian Griffiths, the Max Mara creative director, greeted critics and reporters with a bright smile today. Dapper and sartorially decked, speaking Italian with a heavy English accent, Griffiths was quite a character. He was clearly amused by the story he created to buoy his Max Mara collection: a spy story, in fact, largely inspired by the TV series "Killing Eve" and by the work of playwright and actress Phoebe Waller-Bridge.

"We need more women detectives," he uttered, laughing, in order to explain the slightly tropical sense of military that pervaded the line up of suits with cargo pockets and bermudas in lieu of trousers, field jackets, faded pastels and the occasional slinky dress, accessorised with high-heeled boots and bags so big as to resemble suitcases. Charming pieces, indeed, and executed excellently as Max Mara always does. Most of all, they were pieces that real women will really want to wear. All fine, then, but not much to truly carry the narrative. The goings got repetitive pretty soon, in fact, and thereafter boring, which is what spy stories shouldn't be.