Jeremy Scott's 'flat pack' concept paid off in its subtler moments, but these pieces worked better in pictures than in the flesh. 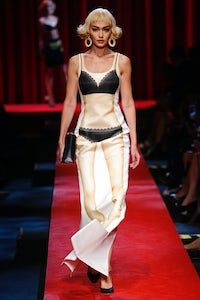 Jeremy Scott's 'flat pack' concept paid off in its subtler moments, but these pieces worked better in pictures than in the flesh.

MILAN, Italy — In a season where overtly feminine fantasies have occupied the minds of more than a handful of designers, you can leave it to Jeremy Scott to twist Moschino's mood with the times, undercut by his comic perspective on fashion’s frivolities.

Looking back at paper doll crafts, his Spring/Summer 2017 show for Moschino revolved around the type-cast figures of that 1950’s pastime, sending out a bevy of beauties in a play on the two-dimensional cut-out-and-keep dolls. Replete with superfluous white ‘paper’ tabs dotting the outline of each silhouette, Scott did his version of ‘flat-pack’ but not quite in Rei's way, nor Martin Margiela's signature trompe l'oeil either.

Instead, he cherry-picked from Franco Moschino’s house icons (from teddybears to polka dots and pearls) and squashed them flat into paste jewellery, swimsuits, and perfectos or trenches printed with their missing zips and belts.

More cerebral than seasons past but no less kitsch, Scott tackled his spatial concept with gusto, and it paid off in its subtler moments. Unfortunately the strange side profile (when one’s view passed from each look’s front to its back) and ungainly walk that accompanied his bow-bedecked finale gowns proved that these pieces offer quite a different reality in pictures than in the flesh.