At New York Fashion Week, There’s Punk Under the Polish

A highbrow pack of New York youth have rejected traditional luxury in favour of a new fashion culture aligned with individualism and the contemporary art scene.

At New York Fashion Week, There’s Punk Under the Polish

A highbrow pack of New York youth have rejected traditional luxury in favour of a new fashion culture aligned with individualism and the contemporary art scene.

NEW YORK, United States — Despite what you may have heard from a chorus of European editors, New York fashion is vibrating with new energy. To be sure, flat, commercial clothes are everywhere, but if you dig a little deeper, you’ll quickly discover that under the glossy veneer of the bigger shows, a revolution is building.

In 2013, the curator Hans Ulrich Obrist and his Swiss Institute collaborator Simon Castets established the young art collective ‘89 Plus’ (they only exhibit artists born in and after 1989). Consider their counterparts in fashion. Slap on them whichever generational cliché you like, but they make up a class of designers who finished high school with smartphones firmly in hand, who first witnessed fashion via the Internet and whose proximity to New York City has meant they are immersed in the cross-pollinated zeitgeist of art, music, film and nightlife that America’s most switched-on city offers. Rather than a comprehensive list of New York’s emerging talent, it is perhaps best to think of this report as a meandering discovery of a fragmented scene with multiple strands and clashing perspectives on both aesthetics and contemporary society.

Hood By Air’s Shayne Oliver, for example, could easily be counted as part of New York's new guard, however the attention he has earned on the global scene (not to mention a runners-up award at the inaugural LVMH Prize) has edged his label closer to the establishment than ever before. This cannot be said for many of the up-and-coming designers in the city, who are faced with a NYFW schedule that caters to commerce, meaning a plethora of presentations and runway shows that serve to stock department stores with digestible garments, yet do little to move fashion forward.

At the beginning of the week, Adam Selman’s show was a well-attended affair and, although not technically part of the same movement as the others in this article, still delivered a subversive fashion message in the Big Apple. His stylist and partner is 032C’s Mel Ottenberg, who rose to prominence through his work with the popstar Rhianna, and Selman can be credited with the sheer, sparkly dress the singer wore to the CFDA Awards in 2014. Indeed, perhaps more tuned into pop culture than contemporary art, Selman channelled a light-hearted riot girl mood through his avant-garde cocktail wear, with every girl in the show sporting a ruffled black choker and Converse sneakers with her silvery petticoats and naughty schoolgirl dresses. 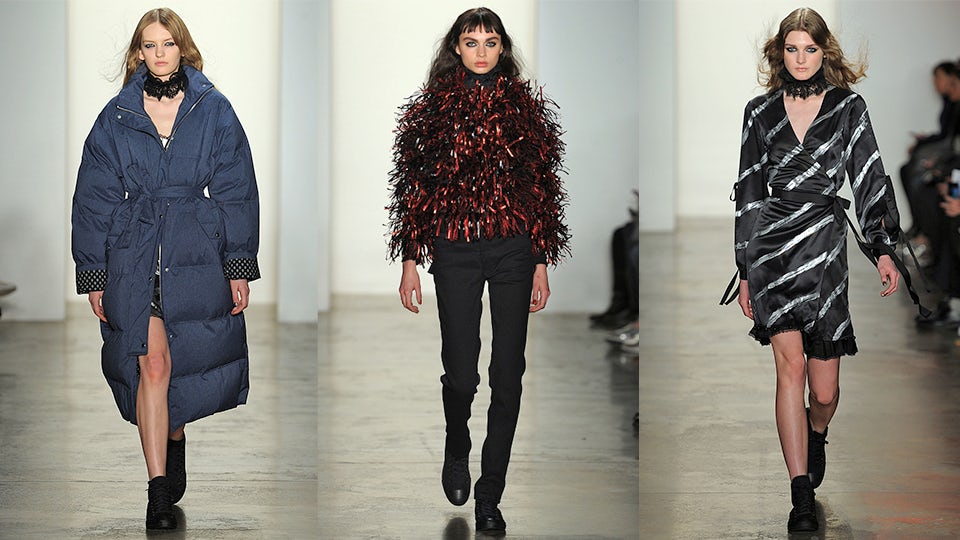 It reminded me of The Craft, a film the designer told me he is desperate to turn into a musical one day — a novel concept that certainly has its costumes sorted with this line-up of zipped denim pinafores, manga t-shirts and tulle rockabilly frocks. There is a distinct irony to the kind of glamour that Adam Selman creates, as though daring a new generation of girls to reject fashion’s obsession with glorified and embellished basics and try something that looks a little off.

Beckett Fogg and Piotrek Panszczyk, the duo behind Area NYC, have a similar approach to bad taste, spawning the fabulously cinematic look books the pair create each season with their photographer pal Charlotte Wales. As though seen through a Vaseline-daubed lens, those pictures perfectly captured the ambience of their lounge-y salon presentation for Autumn 2016, which saw models pacing across plush carpet around a frame structure hanging with crystal droplets like a giant cube chandelier. Their clothes were purposefully tacky, poking fun at fashion and perceptions of femininity with giant flared trousers, holographic jacquard tops, louche ‘peignoir’ robes or Swarovski-traced bra outlined across satin t-shirts and slips, a signature. These are the kind of pieces with enormous editorial potential, yet it will take a very clued-in customer to mix Area’s glitzier wares into a day-to-day wardrobe.

There are a number of other emerging New York names that pay testament to a very different modus operandi, one that you could almost trace back to trend agency K-Hole’s seminal 2013 report ‘Youth Mode: A Report on Freedom,' where the term ‘normcore' first appeared. That is not to say that these designers were not dancing to their own drum beats well before that report was published, but the polemic piece certainly crystallised the viewpoint of a highbrow pack of contemporary youth who have rejected luxury fashion and all its trappings in favour of a new fashion culture aligned with individualism and the contemporary art scene. 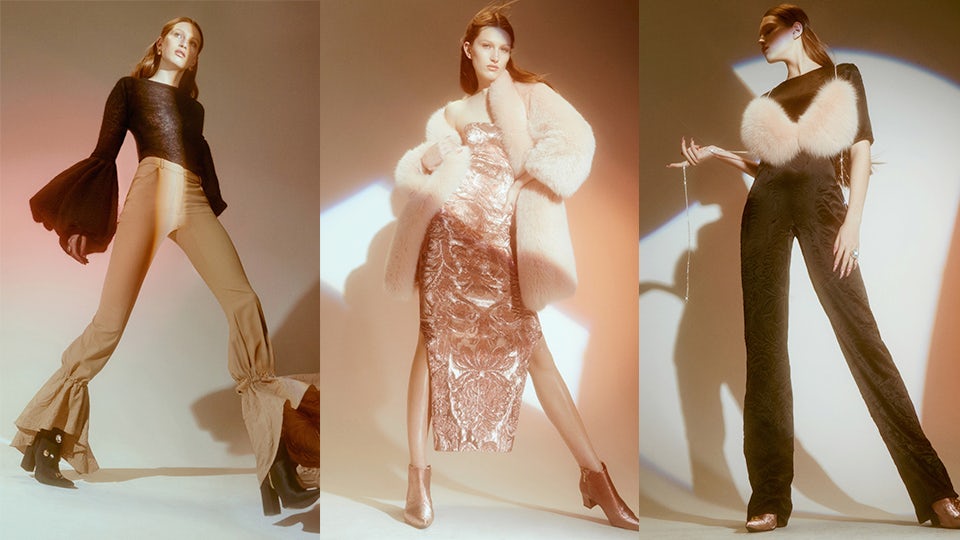 RISD graduates Mike Eckhaus and Zoe Latta could be considered the leaders of the movement, if their inclusion in the ‘Greater New York’ exhibition currently showing at MOMA’s PS1 is any validation. Their label, Eckhaus Latta, designed by the pair between New York and Los Angeles, has attracted an exciting collective of young artists, performers and musicians around it. What they are doing is honest and experimental, channelling fashion design through their respective study of sculpture and textile research to create garments with local fabrics (often 'deadstock' from simpler times) and a hand-touched authenticity that celebrates trial and error.

Their latest show was held inside a dome in the exterior courtyard at PS1, with the patronage of curator Klaus Biesenbach, and combined many of the performance elements of their previous outings to produce an eerie, urgent, other-worldly, dystopian crescendo. The clothes ranged from flowy pants lined with abstract devoré portraits to a paint-dipped flokati rug jacket, rarely with links to draw between one piece or another. In a world where brands are fighting desperately to pinpoint one finite, unmistakeable signature ‘look,’ these designers are content with offering something that’s both more universal and deeply intimate at the same time. 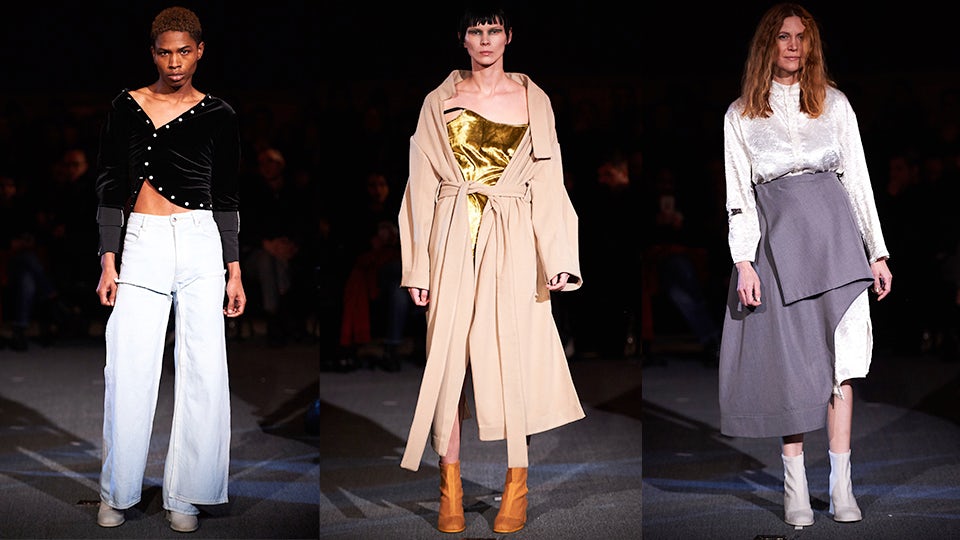 Shan Huq is another New York designer for whom a single brand message is an antiquated ideal, a stance that informed the shadowy parade that wound around the palm-lined rooms of the Cloister Café in the East Village, where he staged his presentation. Boys and girls alike lent their bodies to his purposefully ill-fitting clothes: polo tops and mock-neck sweaters that pulled short in the front, or were cut in pallid, transparent fabrics that left flattery far behind.

There was a sense of the juvenile in Huq’s collection, as though garments had been borrowed and sourced from childhood wardrobes and teenage memories, worn with trainers and socks gone floppy with age. A trio of fleece jackets prompted a gleeful cry from transgender actress Hari Nef, sat front and centre, who picked the blue floral number to wear to Proenza Schouler’s show at the Whitney a day later. That wasn’t her favourite, however. This was a coat printed with reality TV star Tila Tequila, whose face stared from the garment in all its empty, superficial glory. 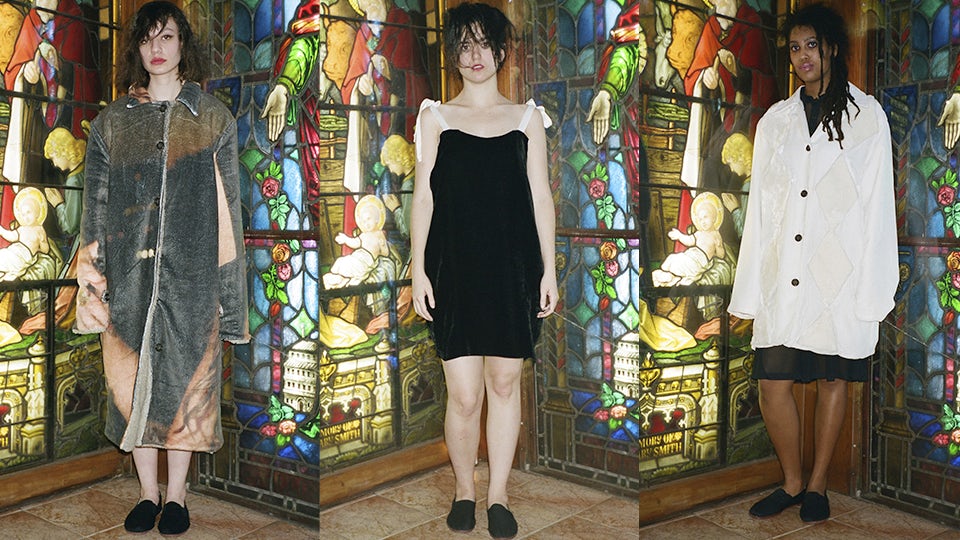 The designer Telfar Clemens is New York born-and-bred, though never fails to celebrate his Liberian heritage in his Telfar fashion shows (or video lookbooks, or apps) with a multicultural cast of models that embody the bold and beautiful take on mediocrity that has come to define his oeuvre. This latest outing elevated the humble t-shirt in the most unexpected way; he employed the medium of cotton jersey to construct three-ply jackets, to knit bulky sweaters and to, most importantly, poke fun at the ‘basic’ nature of his chosen material. The results included intricate tri-colour knit leggings and a wrapped, raw-edge cardigan over an ochre turtleneck with black and white layers exploding from its seams. When he exhibited these garments to Fatima Al Quadari’s monotonous soundtrack (she described each garment as the models walked past), it simulated the disquieting effect of a direct-to-consumer home-shopping channel. Considering current affairs, it felt disturbingly on point. Equally relevant to this movement is the gender conversation, or rather, the rejection of gender norms in favour of a pansexual, genderless proposition that suits all body shapes and sizes. 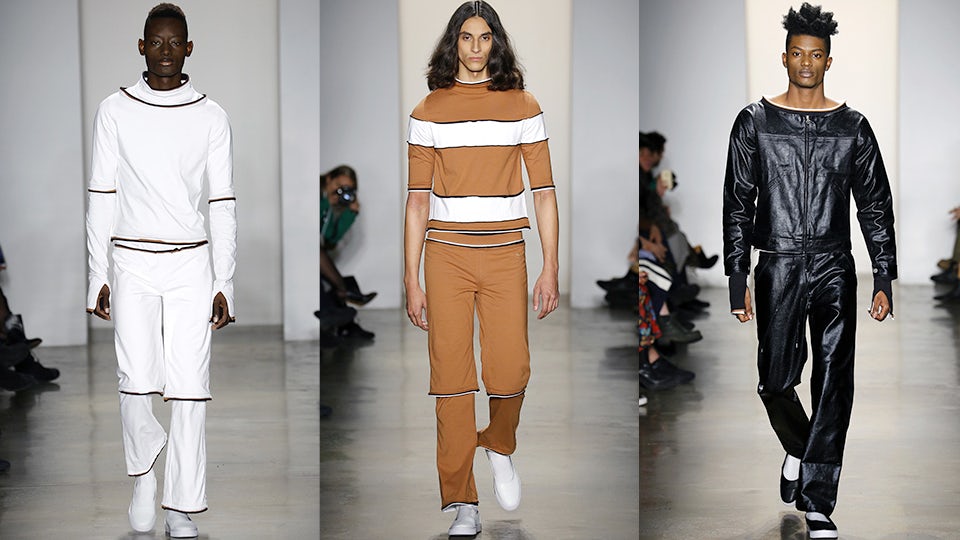 Though this reporter missed Gogo Graham’s show (a transgender designer making transgender clothes), it seems that the issue was well played elsewhere, and LA-based 69US are one label happily embracing this non-conformist state. Preferring a Margiela-esque cocoon of anonymity, 69US describes itself as ‘non-demographic’ and stands for the obvious Yin and Yang balance of the number 69, as well as a nod to its founder’s Cancerian star sign. Their presentation for Autumn 2016 featured a swathe of models careening around a set with no visible barriers between backstage and front-of-house, each wearing a mask dotted with denim fringe (don’t say weave, because it wasn’t) and swapping clothes with each other for two hours straight. 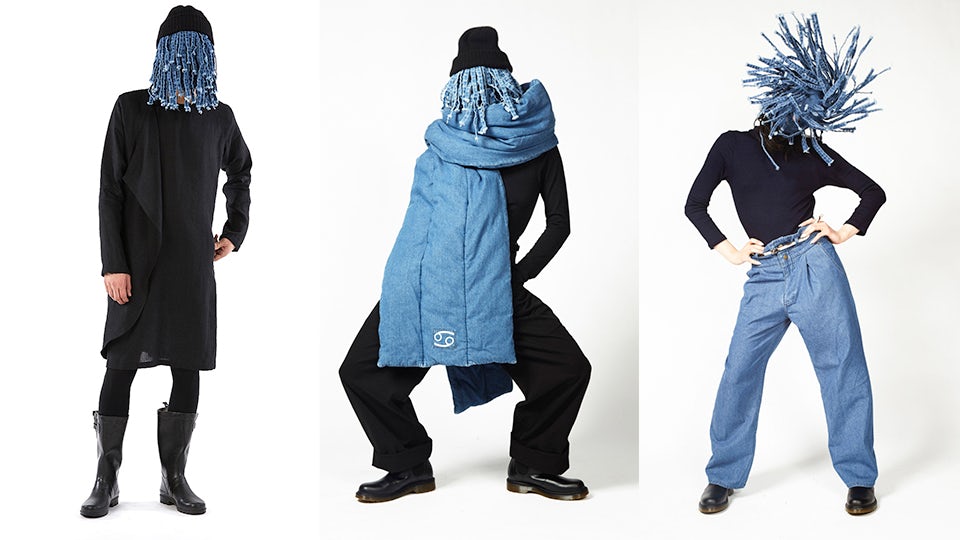 Rather than obscurity, a spokesperson said, those ‘mop head’ masks represented the freedom of being unseen, allowing the collective spirit of the garments to take over and telegraph their energetic message of freeform comfort, one that aligned fortuitously with the values of transgender icon Genesis P-Orridge of Throbbing Gristle and Psychic TV musical fame. She both narrated and starred in a short film about the collection, which featured shaggy looped denim tunics, overcoats in Ikea-towel red and new shapes in the washed blue denim they work with each season. That collaboration, like the one between MOMA and Eckhaus Latta, is proof of subversive art and fashion demolishing generational barriers — the old guard aligning with the new for a burst of dynamic, vital rebellion.