Designers Rushemy Botter and Lisi Herrebrugh radiate enthusiasm, ideas and naivety, but they have yet to figure out how to retain a consistent vision while making desirable clothes. 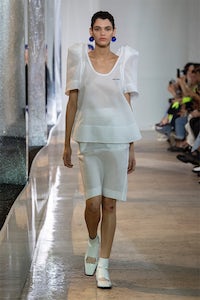 Designers Rushemy Botter and Lisi Herrebrugh radiate enthusiasm, ideas and naivety, but they have yet to figure out how to retain a consistent vision while making desirable clothes.

PARIS, France — Today’s Nina Ricci show opened with an organza T-shirt with quite a strangely fitting raised shoulder-line that made the model look like her head was hammered between her shoulders. That set the tone of a show that played with materials, proportions and silhouettes in clumsy ways, leaving this viewer scratching his head.

This is the second outing for Rushemy Botter and Lisi Herrebrugh. The energetic couple radiates enthusiasm, ideas and naivety, but they are yet to figure out how to channel this in ways that remain consistent with the vision for the brand while translating it into pieces women might actually want to wear. The pin-tucked tailoring, although heavily sculptural, had potential, as did a few shirts. Dresses, on the other end, were often too voluminous, or sprouted flaps that did not actually help to build a flattering silhouette. Insisting on organza as a fabric was a little risky: as a material, it is both airy and firm, so it holds the shape; yet, it is extremely old fashioned.

The Botters have quickly made a signature out of cartoon hats. Shaped like beach buckets, and usable as such, this season's hats were particularly funny. The raised shoulders, meanwhile, were inspired, according to the designers, by maid uniforms, which they wanted to elevate. Naive, sharply tailored romanticism with an active feel is an interesting proposition on Nina Ricci. But it needs to be trimmed to perfection with stronger product to truly work.