It was an electrifying outing by Julien Dossena, who by now has mastered the house and its codes and can take it wherever he wants. 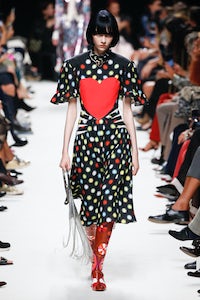 It was an electrifying outing by Julien Dossena, who by now has mastered the house and its codes and can take it wherever he wants.

PARIS, France — "Having fun with it.” This is how Julien Dossena summed up the joyous, rather psychedelic Paco Rabanne collection he showed today. In a Paris season that, so far, has been heavy on braided tree-huggers, ethereal nymphs and glamorous vixens, the prospect of bringing back some fun, and lots of sparkle to the daily act of dressing up was promising. Truth be told, Dossena's is a particular kind of fun — unmistakably Parisian, tainted with kitsch 70s memories of trippy movies, Francoise Hardy and nightclubbing— that, by today's standards, looks optimistic and perhaps a little naive, to say the least.

"There is a pop streak to this house that I find very stimulating, but that so far I have left unexplored. I thought it was the right moment to do so,” he said. Dire times call for some fun if just for a reaction, I suppose.

This all translated into a colorful, swirling collage of bold patterns, heart motifs, flowers, glitter, sharp suiting, flowy dresses and a ton of metal mesh that extended from the clothing to the boots, and this season also to a series of glitzy, kitschy, razor-sharp men's pieces — an aperitif for a full men's collection to be launched in January.

This is aesthetic territory that, for a moment, was owned by Miu Miu, but Dossena managed to imprint the proceedings with his personal handwriting, upping the ante on pop and psychedelia. It made for an electrifying outing. Dossena, by now, has fully mastered the house and its codes and can take it wherever he wants without any urge to blindly respect the heritage.