Sterling Ruby was a standout at the Florentine event: the look was pragmatic but so punchy, so perfectly edited, so fashion forward that you immediately asked yourself how much Raf Simons was involved.

Sterling Ruby was a standout at the Florentine event: the look was pragmatic but so punchy, so perfectly edited, so fashion forward that you immediately asked yourself how much Raf Simons was involved.

FLORENCE, Italy — Fashion used to be about emotion. Now it’s about stuff: collections that are surgically designed according to formulaic briefs set by marketers and merchandisers. This was perfectly evident at Pitti Uomo, the Italian menswear fair that closed yesterday in Florence.

Of course, Pitti is by its very nature focused on product. It’s a trade show, after all. But alongside the original fair, it has developed a unique and media-savvy program of fashion-forward runway shows, presentations and exhibitions, which this season amounted to a mini-fashion week, inviting this critic to judge the endeavour differently.

The Olivier Saillard-curated exhibition, "A Short Novel on Men's Fashion," held at the Museo della Moda e del Costume in the Palazzo Pitti, was surprisingly low on emotion — especially coming from such a poetic curator — and completely crammed with stuff. It felt like the product-focused mentality of the trade show had invaded the museum: a potentially challenging concept that didn’t quite stick. "A short novel" turned out to be a way to celebrate Pitti’s breakthrough strategy of packaging a trade show with special events on the 30th anniversary of its inception, remembering the late Marco Rivetti who started it all. But it was also a way to bolster the museum. Every designer who ever showed at Pitti, and every major brand that participated in the trade show donated an individual item or silhouette, making for a massive set of specimens capturing the way in which menswear has changed over the years.

So far, so good. The problem was, the exhibition lacked a plot. Items were laid on big books or put on hangers, grouped per themes around ancient portraits of gentlemen, but it was a bit hard to follow. Too much stuff clogged the eyes and erased the poetry. Less would have definitely been more, not forgetting that Saillard himself works wonders with less, as he did with his Ephemeral Museum of Fashion in the very same place two years ago.

Compared with such a senseless flood of stuff, the totally immaterial nightwalk — not a museum, not an exhibition — conceived by Linda Loppa in the Manifatture Tabacchi under the title "If I Could, Unless We" felt like a spare, gloomy and gutsy experiment in crossing art practises — video in particular — with fashion, doing a lot with very little. Nothing groundbreaking, but certainly compelling. Clothing, here, was just pixels, filmed ideas and halos. The videos with dissolving garments by Lara Torres and the Bart Hess digital armour and bodily distortions hit a nerve. And what was missing in terms of tactility was made up for in emotion. It all felt like a punch in the stomach — very Antwerp and very Loppa — and it was nice, for once, to be shaken up.

Despite the enchanting setting of Villa Palmieri and its extensive garden at sunset, Givenchy’s first proper men’s show for Clare Waight Keller left one a little chilly. Entitled “Nouveau Glitch,” the outing was a curious mix of sharp tailoring — faultless and very alluring — and sportswear that hit every possible category, coming across as rather random. What kept it all together, in the end, was the cast of lanky lads with a Britpop swagger to them. The more formal clothes stood out, not least because of the rich Gobelin fabrics, and there were some gorgeous velvet nylon parkas. But ultimately it felt like an exercise in merchandising without a narrative. 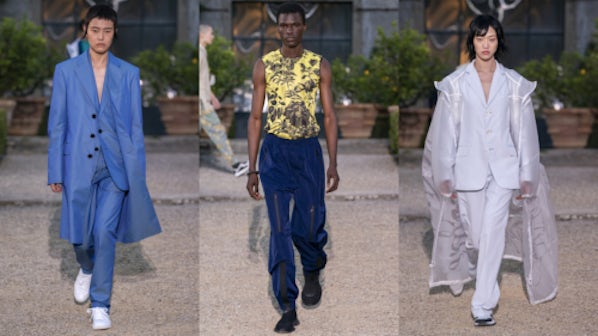 Another brand that needs a shot of warmth is Salvatore Ferragamo, where Paul Andrew debuted as the sole creative director of the brand with Ferragamo's first men's-only show in a few years. To add another first, the show was held in Piazza Della Signoria, with the marvellous Palazzo Vecchio as a backdrop. It all made for a sensational spectacle — the minimal set up, with rows of mirrored benches and nothing else, was a masterstroke. The collection was strong on leather and craft, which were interpreted in clean and effortless, workwear-inspired pieces.

The colour palette, starting calm and neutral to rise up to brighter and richer tones, was charming, but overall the effort lacked elan. It's like Andrews keeps playing it safe. The direction he set — luxuriously simple, understated yet bold — is the right one, but he needs to let go to stop his work from becoming boring. Simplicity needs accompaniment from something slightly wrong to look lively. Moreover, there is quite a sensual strand to the Ferragamo DNA that’s currently dormant and just begging to be fully revived. 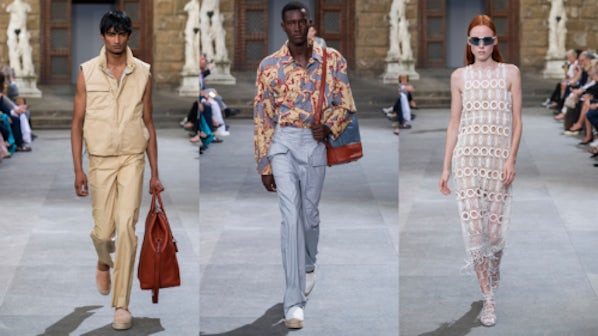 Elsewhere, Massimo Giorgetti celebrated the 10th anniversary of MSGM’s decision to show in Florence instead of Milan. It was a smart move as the Milan schedule looks rather slim this season and the anniversary had Giorgetti in celebratory mode. By addressing summer as a state of mind, he produced a very MSGM collection of rather basic pieces — sportswear and lots more of tailoring than he did in the beginning — splashed with bright colours and slightly kitsch prints. Again, it was nothing thrilling, but sure this is something the market likes: you can see guys with no interest in overcomplicated shopping going mad for it. This is Giogetti's forte: he speaks an easy language anyone can understand. Even his taste in art leans in the same direction: he's all for colour, and a certain kind of figuration, which he often uses in prints. Originality is not Giotgetti's forte — the choreography of the show owed an evident debt to Koché — but he makes a nice product. (Fashion with a capital F is, of course, another thing).

Another designer celebrating ten years of his eponymous label this season was Marco De Vincenzo, which made for the right moment to launch menswear. Merging normal or quasi-ordinary man shapes — boxy suits, shirts, jumpers — with glittery fabrics, kitsch geometric patterns and lots of pleating, De Vincenzo delivered a bold statement that felt consistent with the psychedelic template he has set for the label. It takes a daring man to wear so much sparkle and pleating in real life, but the stress on a certain semiformal normality toned it all down, making it all look plausible. And if Asia is the market to court, this collection looks like a hit.

But just when you thought product was going to bury us all at a rather unexciting Pitti — save for De Vincenzo and Pronounce, the Chinese duo who delivered a burst with their European debut — along came the artist Sterling Ruby with an electrifying experiment in fashion-making S.R. STUDIO LA CA. This was not an exercise is seasonality. Backstage Ruby was adamant about it: "There is no business plan: we'll see how it takes off from here, but I am completely uninterested in doing new things every six months," he said. Instead he’s embracing sporadic drops, the first of which was available on Ssense today. 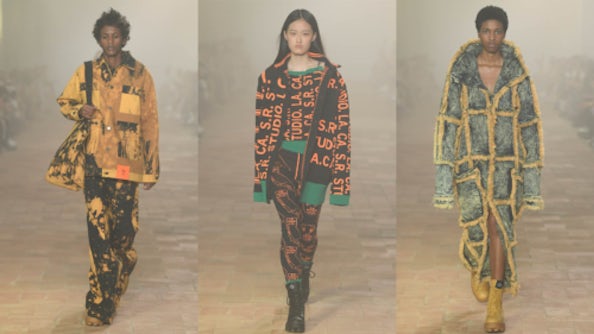 Such a lack of formal strategy feels already energising: the complete opposite of how a label is typically launched and managed, but perfectly truthful to what fashion was back when it was really inspired and inspiring. Equally free was the approach to clothes-making: there is something wonderfully pragmatic and at once daringly inventive to the way artists do clothing, and Ruby, who belongs to the lineage of hands-in-the-dirt, muscular American artists who put a lot of physicality in their work, made it all explode in a feast of psychedelic workwear, brutally gentle prairie dresses, bleached ponchos and colour-dripped aprons, all grounded on inflated shoes and completed with outsized totes.

The look was pragmatic but so punchy, so perfectly edited, so fashion forward, you immediately asked yourself how much Raf Simons was involved. The two, after all, have collaborated closely in the past. But this is speculation. What counts is the energy the experiment exuded. Ruby said it was "liberating to imagine art as something that could be worn instead of being hung on a wall." As for this critic, it was liberating to see such an undiluted shot of creativity.