This collection had a verve that suggested an upbeat outlook pays dividends. 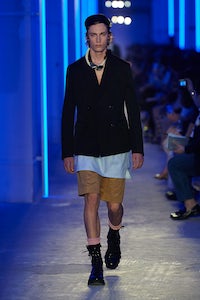 This collection had a verve that suggested an upbeat outlook pays dividends.

MILAN, Italy — Miuccia Prada debuted her men’s collection for Spring 2020 in a techno extravaganza in Shanghai two weeks ago. For those who missed that experience, the clothes came back to Milan for a presentation on Sunday in the Prada boutique on Via Montenapoleone. Miuccia’s mantra for the collection was “lightness, simplicity, no eccentricity.” True, the fabrics were twist-free classics – wool gab, oxford cloth, cotton fleece – but Prada has a congenital inclination to at least a little oddity and there it was, in the candy-coloured shoes with kilties (taking us back to the Golf Collection of Spring 2012) and the tunics with deep scooped necklines, layered long-under-short with blazers and blousons, or over baggy skater shorts.

That play on proportion was one theme, like the massive candy-striped rugby shirts over equally exaggerated bermudas. It shaded into a military subtext, parkas with huge bellows pockets, safari jackets in Prada’s signature techno fabrics. All were branded Linea Rossa, in anticipation of the upcoming America’s Cup, in which Prada will be more involved than ever. The best of those parkas were in post-mo shades of pink, lilac, pale blue and yellow, echoes of the Memphis movement which disrupted Italian design in the 1980s. There were pop bowling bags to match. Thinking about how dark Prada has recently been in its reflection of the current climate (the sleep of reason breeds monsters!), it looked like Miuccia was making an effort to brighten the gloom. “Optimist Rhythm” was the collection’s working title.

That rhythm was definitely the pulse of 80s pop culture, not just Memphis, but every new wave pic sleeve or power pop graphic or technology upgrade from that era. One jacket was a collage of po-mo postcards, another was printed with cassettes, floppy discs, camcorders. They looked almost naïve now, like emblems of an era when technology promised something better. And if there were flashes of Frankie Goes to Hollywood on the soundtrack in Shanghai, they served to highlight how that band’s scandalous glee has been well and truly supplanted by a much more cynical kind of social commentary.

Still, even if optimism is increasingly hard work, this collection did have a verve that suggested an upbeat outlook pays dividends, not simply because Prada’s fortunes seem to be recovering, but also because the alternative is ultimately soul-sucking despair. And we’re not there just yet.