At Prada, Memories Are Made of This

Miuccia Prada's new collection plumbs the past to reassure the future. 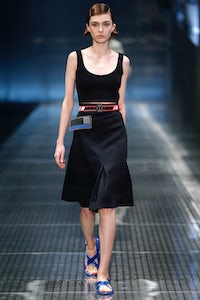 At Prada, Memories Are Made of This

Miuccia Prada's new collection plumbs the past to reassure the future.

MILAN, Italy — I can’t remember a time when Miuccia Prada looked so happy at the end of a show. Instead of her usual tentative nod from the wings, she walked down the catwalk to acknowledge David O. Russell, many times Oscar-nominated director and the man responsible for the film that played on multiple screens throughout the Prada presentation.

The subject of Russell’s film was the mutability of time. No surprise that Miuccia was feeling the same idea. Her new collection skated across Prada’s back pages with an ease so straightforward you could imagine that it would be charming if this was your introduction to the brand.

The same idea was at work with the men’s show in June. Memories. Reassurance. Brand icons. There, it was a revisit of the black nylon backpack on which the company’s fortunes were rebuilt in the 1980s. The collection had a rave-y, idealistic, community-of-travellers’ edge. Here, the dominant visual motif was a variant on the very particular graphic prints with which Prada flayed its mark on fashion in the mid-90s, when revenues soared as the label became the industry’s go-to for new.

But those days are gone. Prada is wrestling with reality (with the redundancy that seems to inevitably attach itself to mature businesses, unless you’re prepared to make a 180 degree flip like Gucci). Getting back to that notion of introduction, it made commercial sense to return to the heyday. But what was it that virgin eyes would actually have seen in this collection?

First thing: marabou. You could imagine a newbie wondering how and why the hell all those feathers were everywhere? A seasoned observer might conjecture that they were one of those things Miuccia had always hated, the thing she felt compelled to include to confront her loathing (suede is the most famous example). Not at all. She thought marabou was “the most silly thing”. Which sounded like the consummate back-handed compliment, by the way, because there’s something in Miuccia that wants to nail emblems of ultra-femininity to the wall alongside tokens of feminism.

So her marabou trimmed the business-y camel wrap top that accompanied the black wrap skirt of a model clutching a big, business-y clutch. Well, sort of business-y. The collection clarified how perverse Mrs P has always been in her various definitions of the way a woman can be. “A new way of elegance” were the words she used to nail this particular offering.

It was plain that her new elegance involved maximum mobility, a get-up-and-and-go physicality that could turn on a dime when breaking news intruded on your own patch. Short shorts, tank tops, jumpsuits, skirts slit for movement, everything calibrated for rapid response… but rimmed with marabou, and accessorised with sandals. A kind of best-of-both-worlds modernity… fact and fantasy.

There was an entirely brainiac postscript to this whole affair. Inevitably, it pertained to the soundtrack by longtime Prada collaborator Frederic Sanchez. The nu-Satie piano stylings of Alex Menzies mixed with Donna Summer’s MacArthur Park and Diana Ross’s Love Hangover. Sanchez called it an existentialist mash-up, here, the melancholic recognition of a world in flux, there, the sheer, wonderful denial of disco bliss. The world's a darkening place. Thank fashion for shining its own light. In fact, thank it twice.