At Rick Owens, Modesty in Monumentalism

If the passage of time will eventually defuse the discomfort and discord of the present, that doesn’t mean Owens didn’t feel compelled to react to them. 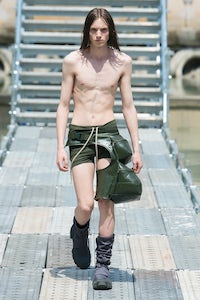 At Rick Owens, Modesty in Monumentalism

If the passage of time will eventually defuse the discomfort and discord of the present, that doesn’t mean Owens didn’t feel compelled to react to them.

PARIS, France — “Discipline… and modesty… and contribution…” Rick Owens was reflecting on the qualities that he hoped underpinned his latest collection. Then he caught himself, with a laugh, “…as I create this huge, theatrical, bombastic set.” True, the scaffolding that towered over the Palais de Tokyo’s parvis (Owens was thrilled to learn a new word — it refers to a central courtyard enclosed by columns), was as monumental as D.W Griffith’s legendary Babylon set for Intolerance a century ago, dwarfing the models, whose prolonged walk from heaven to earth, along platforms, down stairs, in heat that was also Babylonian definitely earned them their fees.

But there was a curious something about the monumentalism that did actually connect with those qualities Owens listed. He claimed a recent interest in land art, where artists are like architects, “grappling with the elements, wanting to subdue them.” And still, it all comes to dust, ashes to ashes. “It makes me think of death in a positive way,” he mused. “It’s humbling, that kind of eternal thing. Anything I took seriously isn’t going to matter in 200 years.” So Owens called his collection “Dirt,” a primal counterpoint to last season’s aspirational “Glitter” (“about wanting to make dirt into something else”).

But if the passage of time will eventually defuse the discomfort and discord of the present, that doesn’t mean Owens didn’t feel compelled to react to them, as he has been doing for several seasons. “I want to wear something a little more disciplined,” he said. “Stiff and formal, a bit grand.” His preference would be the grandest of fabrics, duchesse or gazar. Here, he used a dry nylon cotton with the same kind of rigidity, to give his tailored jackets a heft. They were paired with trousers so voluminous they pooled on the floor “like ballgowns”, Owens said.

But this silhouette was familiar to his acolytes. Also familiar: the shape that exerted a massive gravitational pull on tops, dragging them sideways “like tarps wrapped around half-finished constructions,” (Owens again). Eldritch volume is the core of the designer’s shamanic power as a designer. He reined it in with severe, cropped boleros-cum-jean-jackets, with pants as high-waisted as a toreador’s.

Owens’s love of Old Hollywood is also well-documented. Rudolph Valentino and Ramon Navarro were redefining masculinity at the same time as Griffith was reshaping celluloid spectacle. I saw 21st century Rudi’s and Ramons trolling the 21st- century-Griffiths set on Thursday. And that was all the excuse I needed to ask Owens if he’d ever wanted to direct, especially after the event we’d just witnessed.

“No,” he answered instantly. “I like being able to make real things happen in real time. Even if my clothes are theatrical, I always wanted them to be real, so people could wear them. That’s why they were grey at the beginning. They could be assimilated.” He paused for one of his raised-eyebrow beats. “And they could corrupt the world.”